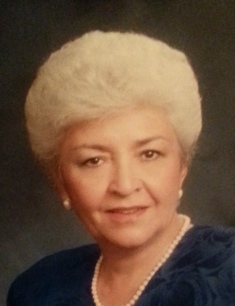 Maria R. Trevino January 8, 1929 – June 5, 2014 Maria R. Trevino, a long-time South Bay resident and graduate of Redondo Union High School, passed away peacefully June 5th at home in Lomita with family at her bedside. Born on a ranch called La Herradura in Mexicali, Mexico, Maria and her younger brother Ricardo Real moved to the United States in 1941 when their widowed mother, Josefina Real, married Leo Presiado. In 1948, the family opened Leo's Mexican Food, a Lawndale landmark that has been operated by her brother Lionel since 1967. Maria met her late husband, Richard (Dick) Trevino, Jr. when he was 15, and they married in 1950. When Leo died tragically in 1957, Dick and Maria stepped in to help Josefina run the restaurant until they purchased a business of their own in 1960; Romero's Mexican Restaurant in North Torrance remained a family-operated eatery for 42 years. Sadly, Dick's passing in 1986 brought an untimely end to their thirty-six-year union. In his absence, she demonstrated her amazing resiliency, determination, and very capable business acumen. Maria was an active woman who loved singing, painting, writing, traveling with her late sister-in-law Lupe, hosting Christmas Eve dinner for her large, extended family, and tending her impressive flower garden. She is survived by her children-Richard Trevino, Anna Robles, Dianne Oltman, and Andrew Trevino; ten grandchildren- Nicole, Michael, Marisa, Nicholas, Vanessa, Olivia, Adrienne, Andrew, Victor and Daniel; a great grandson-Michael; her brothers-Ricardo Real, Lionel Presiado, and Ruben Presiado; many loving nephews and nieces; and several steadfast friends. All of them can attest to her unflagging graciousness. Visitation is scheduled for Monday, June 16 at Rice Mortuary in Torrance from 5 to 9pm, and Mass will be celebrated at St. Margaret Mary's Catholic Church the following day at 10am to mark Maria's passing.