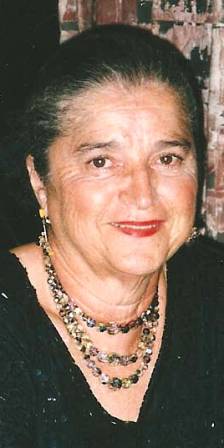 Maria Helena Polanco, or simply "Maria" was born to parents Lorenço and Bibiana Rabbat on April 14, 1934 in Sao Paolo, Brazil. Due to her father's sudden death at the age of 1, Maria experienced a difficult childhood. When she was only 17 years of age, Maria emigrated with her family from Sao Paolo, Brazil to the United States of America. It was here that Maria learned to speak English, Spanish, and completed her education at Polytechnic High School in Los Angeles. On January 19, 1957, Maria married the love of her life Elfrego "Al" Polanco, and was later blessed with four children Alfredo, Marisela, Victor, and Veronica. Maria worked at the Telephone Company, Parco, and Max Factor Cosmetics Company as a cosmetic line employee. Later, she worked as a teacher's assistant for the Hawthorne School District. Maria enjoyed cooking all types of food – many, particularly her husband, children and grandchildren received the benefit of her many culinary gifts. She also deeply enjoyed many music genres ranging from Brazilian Bosanova and Samba, to Mexican Mariachi and Boleros, to Elvis Presley and Country. Maria would often be heard in her home singing at the top of her lungs and sometimes even dancing. Throughout her life, her pastimes were watching Telenovelas, World Cup Soccer – always rooting for the nation of Brazil to take the gold cup, of course, and global travel. Throughout Maria and Al's travels, she always would comment that her most memorable trip was when they visited the Holy Land in 1999. However, it was always Maria's greatest joy when she had the opportunity to be with her children and grandchildren. In her later years, Maria made the most important decision of her life when she placed her trust in her Lord and Savior Jesus Christ. From that time on, Maria always had a clearly evident zeal about her faith, and was never bashful about boldly sharing it with others. As a Christ-follower Maria used her many gifts to serve in children's Sunday school, participate in small weekly church groups, and attend various church events. She is survived by her son Alfred Daniel Polanco, her daughter Marisela Eva Di Pietro (Polanco), her son Victor Hugo Polanco, and her daughter Veronica Cristal Mera (Polanco); her grandchildren, Albert Polanco, Sergio Di Pietro, Giorgio Mera, Gizelle Polanco, Giovanna Mera, Sofia Mera, Victor Polanco II, and Marco Mera. Maria has left a great legacy for her children and grandchildren to emulate. One thing is for sure, Maria's life was always filled with the Love of Christ, love of many, and she lived an adventurous, yet transparent and exciting life – Maria lived her life abundantly! It was Maria's request in lieu of flowers to please make a donation of your choice to St. Jude Children's Hospital.