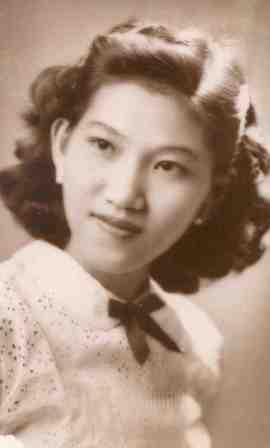 Maria C. Sanger, 83, of Manhattan Beach, died on Sunday, January 20, 2013, at Harbor-UCLA Medical Center. She died of heart failure due to diabetic complications/kidney failure and she suffered from severe vascular dementia. The second daughter of Judge Escolastico Buenaventura and Prof. Dolores C. Velarde Buenaventura of Manila, Philippines, she was born July 19, 1929 and christened "Maria Carmen". She is the younger sister of Pat (Paz Buenaventura Naylor of Ann Arbor, MI) who survives, and predeceased by her younger brother, Ling (Jose V. Buenaventura of NYC). Maria was born in Manila, educated at the Instituto de Mujeres (Grade School to High School) and subsequently earned a law degree from the University of Philippines. Maria was married to Wayne A. Sanger of Holland, MI on Feb. 14th, 1971. Loving and devoted wife to Wayne, who survives, they were married for 40 years and lived in Manhattan Beach. Maria is also survived by her son Robert A. Sanger (wife Kristen) of Roseville, CA, her daughter Maria-Theresa R. Sanger of Redding CA, and son, Anthony W. Sanger (wife Devie) of Redondo Beach, CA. Maria was grandmother to 2 grandsons, Kai and Kobi, and 1 granddaughter, Naomi. Donations to the American Diabetes Association (ADA), in memory of Maria C. Sanger, are greatly appreciated. An "Always & Forever" Tribute page has been created in Maria's name through the ADA site. Please use the following link: http://main.diabetes.org/goto/Maria.C.Sanger Gone But Not Forgotten Don't think of her as gone away Her journey's just begun Life holds so many facets This earth is only one. Just think of her as resting From the sorrows and the tears In a place of warmth and comfort Where there are no days and years. Think how she must be wishing That we could know, today Now nothing but our sadness Can really pass away. And think of her as living In the hearts of those she touched For nothing loved is ever lost And she is loved so very much!