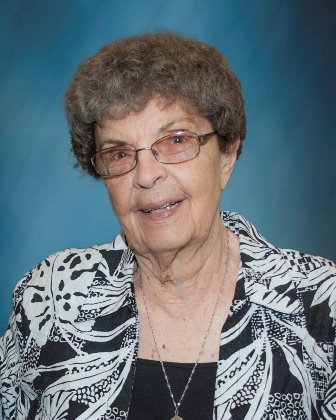 Marguerite M. Thackeray, a longtime resident of Gardena, CA, passed away at the age of 91 on Friday, January 12, 2018, in Torrance, CA. Born in Diamondville, WY, she was the coalminers’ daughter of Joseph and Catherine Pistono. The family moved to Ventura, CA in 1941, where she graduated from Ventura High School and Ventura Jr College, earning her A.A degree. She began working for the Pacific Telephone Company in 1943 and would continue to be employed at Compton and Catalina Island facilities until 1959. In 1947 the family moved to Gardena, CA. Marguerite met the love of her life, Donald Thackeray, at the Figueroa Ballroom in 1952 and they were married at St. Anthony of Padua Church, Gardena, in 1954. Two years later they moved into the home where she and Don raised a family and resided until her death. Marguerite taught religious education for three years at St. Anthony’s and in 1970 became the first secretary and office manager for St. Anthony’s School of Religion (CCD.) In 1977, she became employed at Hughes Aircraft and retired in 1988. Mom and Dad loved ballroom dancing and in the 70s even took disco lessons. She enjoyed collecting glassware and often visited the Rose Bowl Flea Market. She came from an era when a housewive’s pride was shown in how well they took care of the family and kept up the house, and Marguerite was known for having the cleanest house around! She was an avid painter and quilter and her artwork decorates the home. Marguerite also enjoyed gambling and loved her Los Angeles Lakers and Clippers! Marguerite is survived by children Michael (Karen,) Karen Miller (Rick) and Patricia Frazier; beloved grandchildren Cole, Christopher (Jessica,) Laurel, Brian, Casey and Daniel, and sister Glenda Vowels. The Vigil service will be held at Lighthouse Memorial and Reception in Gardena, on Monday, January 29th at 7:00 pm with remembrance and reception following. The Mass will be held at St. Anthony of Padua Church on Tuesday, January 30th at 10:00 am with a reception to follow at Lighthouse Memorials.