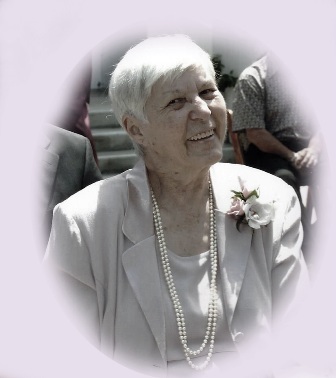 With tremendous love for her family, Margaret Ruth Wortham Moody lived for 96 years. On Valentine's day 2017 she was reunited with her husband of 38 years, Leonard "Len" Oswald Moody. Born in Dallas, Texas August 1, 1920, Margaret "Marg" was the middle daughter of Charles Henry "Henry" Wortham of Mississippi, and Jewel Beatrice McGwier of Alabama. Marg had Elizabeth "Libu" who was six years her senior and Virginia who was twenty months her junior as companions. Sadly when she was just 3 ½ her mother passed away and in 1931 her father, Henry packed up his three daughters and moved to Southern California. They lived in boarding houses and hotels before settling in Redondo Beach. Marg went to Manual Arts High School in Los Angeles, during her senior year she met Len at a Church Youth event. A few months later she turned down an opportunity to join the fledgling Disney Studios in order to get married on April 16th, 1938. They lived and loved soon welcoming their children Linda (May 1941) Janice (October 1944) and finally their baby boy David (1952). Raising the children with camping and games, that carried off onto gifts of a new generation of family. For almost two decades. In September 1958 they were blessed with their first of many grandchildren. Marg and Len basked in the life of grandparents together embracing their rapidly growing family with gusto. In 1976 Len passed away leaving Marg to see her great grandchildren, and great, great grandchildren alone. She had more than enough love to go around advising everyone who walked in her door to call her Grandma, and "I am a hugging Grandma, get over here". She lived a long life, that wasn't always easy. She was born post World War 1 and Mid-Depression. She experienced the national tragedies of Pearl Harbor and JFK, She saw the Spruce Goose being taken through the streets to Mine Field (LAX). She was involved in local politics with her father, who served as a Councilman and later Mayor of Redondo. Her pride was her family. She was endlessly generous and selflessly loving, she was the fabric, teaching us to love selflessly with grace and pride. Margaret Wortham Moody was preceded in death by her Husband, Leonard Oswald Moody; her mother, Jewell Beatrice McGwier; her father, Charles Henry Wortham; her sister, Elizabeth Seals; her daughters, Janice Kathleen Low and Linda Elizabeth Church; her granddaughter, Selene Laura Church; her grandson, Jamie Rain Church; and her great-granddaughter, Tawney Margaret Ronk. Margaret Wortham Moody is survived by her son, David Moody; her sister Virginia Mae Wortham; her grandchildren, Kathleen Elizabeth Killgore, Charles Barry Jones, John Paul Jones, Jennifer June, David Mac Jones, Tina Louise Jones, Michele Stuto, Luis Castillo, John Church, Crystal Moon Church, Shanti Star Mignogna, Sydney Moody, Kevin Moody; and over 50 great-grandchildren and great-great-grandchildren. BLESSED. Margaret R Wortham Moody lived in the comfort of love for a near-century, establishing a monumental effect on the world through her actions and beliefs, and thus the actions and beliefs of her beloved descendants.