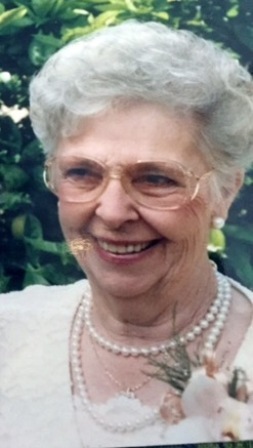 Margaret Marie Hoffman 1917 - 2015 On January 14, 1917 the heavens blessed our world with a woman who would become nothing less than unforgettable. A loving daughter, sister, wife, mother, grandmother, great-grandmother, great great-grandmother, and friend. Margaret was born in Los Angeles, CA to Hugh and Marie Griffin, raised in Inglewood, CA, and then met and married her childhood sweetheart of fifty-two years, Bernard A. Hoffman. Margaret joined Bernie on November 5, 2015 with her family by her side at nearly 99 years of age. Margaret and Bernie bought a house in Manhattan Beach, CA sixty-two years ago. They dedicated themselves to raising ten children before Margaret returned to her cherished nursing career. She was a head CCU nurse at Little Company of Mary Hospital retiring in 1982. Margaret is survived by her children Carol (Paul), Ann (Richard), James (Elaine), Margaret (Dennis), John (Brenda), Mary (Frank), Patricia (Raymond), Joan (Ed), Eva (Jon) and Alana as well as thirty-seven grandchildren, sixty-nine great grandchildren and five great-great grandchildren. She is loved and will be greatly missed. Services will be held 9:30 a.m. Monday, November 16th at American Martyrs Church, Manhattan Beach, CA. In lieu of flowers, donations may be made to roverrescue.com.