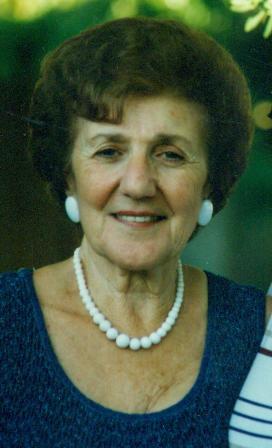 MARGARET HANNA February 10, 1923 to December 28, 2015 Margaret Hanna was born in Pawtucket, Rhode Island on February 10 1923. She was the youngest child of five children born to Mary and Joseph Sabbagh. She and her one brother and three sisters all grew up in Pawtucket. Margaret was known to most everyone as Margie. Those were the days of the depression. Even though times were hard, the Sabbagh family made the best of the worst times and we all have heard many fond memories from those days in New England. At age 17, Margie met Tony Hanna, age 18, who was also from Pawtucket. They soon fell in love and got married. Not long after they were married, World War II broke out and Tony enlisted in the navy and was shipped off to North Africa after he finished flight training school in Memphis, Tennessee. After the war was over, Margaret and Tony moved to southern California and eventually persuaded most of Tony's other family members to move there as well. In the mid 1950s, Tony and Margaret had two children, Tony Jr. and Anne Marie. Tony and his four brothers all worked together in a family-owned business known as Hanna Brothers Auto Service for 37 years. In 1965, Tony and Margie moved the family from Hill Street in Los Angeles to Ladera Heights near Culver City. Eventually, Tony and his brothers sold the family business known to them as "the shop" and retired. A few years later, Tony and Margie moved to a condominium on a golf course in Palm Desert, California. In 2008 Tony and Margie moved to Hickory, North Carolina to be closer to Anne and her family. On June 10, 2010 Tony died from complications of a stroke and daughter Anne Marie took care of Margie. Margie loved to entertain and her home was always filled with family. Although she claimed that she hated to cook she was an excellent cook of Syrian food. Margie had a great sense of humor and genuinely loved all her extended family. You knew if Margie liked you or not if she tried to push food on you. Ever the gracious hostess, most everyone knew how much she enjoyed feeding everyone. Although Margie didn't have any hobbies per se, she loved playing games and especially liked Rummikub. In her younger days, Margie was a great sports fan. She could be found watching the Dodgers play baseball and the Laker play basketball on TV. She also liked playing the slot machines when she and my dad enjoyed trips to Las Vegas. First and foremost, Margie loved being with family. Her sisters and brother in laws were her best friends and she loved keeping up with all her nieces and nephews. Margie was very proud of her children and grandchildren and her life centered around them, her husband, and her extended family. Her genuine love and caring will be missed by all. God rest her soul. In lieu of flowers, donations may be made to Redwoods Teen Challenge, 1805 4th St., Eureka, Ca. 95501. In memory of Margaret Hanna, Matt Kunkle's grandmother.