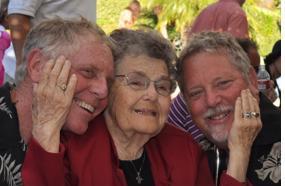 Margaret C. Johnson Margaret C. Johnson, 85, passed away peacefully in her home on July 28, 2013. She was born Margaret Cecilia Zsebok in Berkeley, West Virginia on July 30, 1927. Margaret married Louis Niezgodzki on January 3, 1945. They settled in Gardena, California, where they had three sons; Lawrence, Danny and Richard. While raising their sons, the couple operated a successful business, Crenshaw Plumbing Service, until Louie's death in 1977. She later worked for Los Angeles Unified School District. Margaret was blessed with a second love, Robert I. Johnson, and they spent 30 years together until Bob's passing. They enjoyed their times traveling the world and providing service to the VFW Post #3261. Margaret was a proud member of the VFW Ladies Auxiliary for over 50 years. She was dedicated to the VFW and enjoyed volunteering at the VA Hospital in West Los Angeles and at the Gardena VFW for bingo night. She was proud of her three sons' following their family's tradition of military service in the Navy. She was preceded in death by her parents; three siblings; 1st husband Louis Niezgodzki; 2nd husband Robert I. Johnson; eldest son Lawrence R. Niezgodzki (2012); and grandson Matthew J. Niezgodzki (2004). She was survived by her sons Dan (Linda) Niezgodzki; Richard (Linda) Niezgodzki; daughter-in-law Linda Niezgodzki; Stepson Steve (Tammy) Johnson; stepdaughter Jacquelyn (Steve) Cross; grandchildren Michael (Kimberly) Niezgodzki; Michelle (Vicente Jr.) Zuniga; Kyle Niezgodzki; and Richard Shaw. Viewing will be held on Sunday August 4th from 4 - 8 pm at Lighthouse Memorial in Gardena. Funeral Services will be held on Monday August 5th at 10:00am at Lighthouse Memorial. Burial Services will be held immediately after at Roosevelt Memorial Park & Cemetery in Gardena. Following the burial, the VFW Ladies Auxiliary will be hosting a Memorial Lunch in Margaret's name at the VFW Post # 3261 in Gardena. In lieu of flowers, please consider donating to the American Diabetes Association.