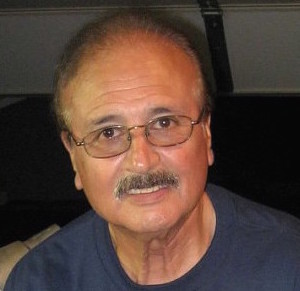 Manuel T. Suarez passed away peacefully at home on August 21, 2016 at the age of 76 surrounded by his beloved family. He served in the U. S. Army, 1st Battalion, 83rd Artillery, Fort Sill, Oklahoma. He was a loving husband for 47 years to his wife, Mary, as well as, dedicated to his career as an upholsterer at Trim Line Auto Upholstery in Redondo Beach for over 45 years. He will be remembered for his humor, nicknames, and most importantly his heart of gold. Manuel will be greatly missed. He is preceded in death by his father, Frank, and his brothers, Rudy Suarez and Abe O'Con. He is survived by his wife, Mary, two daughters, Christina (Vivek) Shivpuri and Michelle (James) Torres; five grandchildren Armaan, Isabella, Maya, Madeline, and Tara; mother, Cecilia Suarez; sister, Mary (Jorge) Guzman; brothers Robert Suarez, and Tony (Lori) Suarez, and numerous extended family and friends. The rosary service will be held Friday, August 26, 2016 at 7:00 pm at Nativity Catholic Church in Torrance. The funeral mass will be offered on Saturday, August 27, 2016 at 10:00 am at Nativity. Interment will follow at Holy Cross in Culver City.