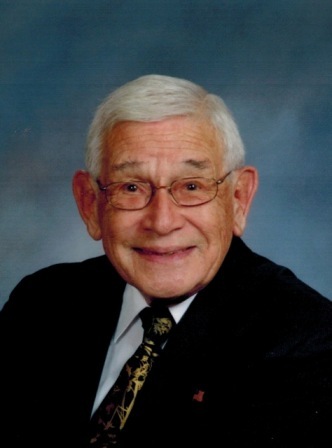 Manuel "Mike" Orozco April 11, 1925 – November, 18, 2015 Loving husband, father, grandfather and great-grandfather, Manuel "Mike" Orozco, a 62 year resident of Torrance, CA, passed into the arms of his Lord and Savior on November 18, 2015. He was born on April 11, 1925 in Los Angeles. After graduating from Washington High School, he served in the Army Air Corp as an aerial gunner, bombardier, navigator and radar operator. He attended Northrup University before beginning his 38 year career as an aeronautical engineer with Northrup Aircraft Company. In 1947, Mike married the love of his life, Barbara Foxen, whom he met while serving as president of St. Michael's Young People's Club in Los Angeles. After living in Inglewood, Mike and Barbara moved to Torrance to raise six children. Mike was an active member of the St. Anthony of Padua Parish for over 62 years, serving as a Eucharistic Minister, on countless boards and committees, always the first to volunteer. He was a Fourth Degree member of the Knights of Columbus and a Serra High School Booster for 45 years. Mike had many interests…photography, fishing, woodworking, camping in Yosemite and trips to Cabo San Lucas. What he loved most was spending time with family and friends. His legacy of love is carried on by his six children: Dan (Cris), Cindy Hyink, Teri Barbosa (Rich), Steven, Mary Pat and Greg (Verly), his 13 grandchildren and 14 great-grandchildren. A Vigil Service will be held on December 2nd at St. Anthony of Padua in Gardena at 7:00 PM. A Memorial Mass will be on December 3rd at 10:00 AM, with reception to follow in church hall. In Lieu of flowers, please make donations to the Mike Orozco Memorial Student Assistance Fund, Serra High School, 14830 S. Van Ness Ave. Gardena, CA, 90249.