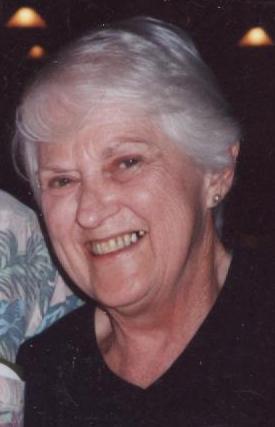 Luella Marie Forrest, longtime resident of Manhattan Beach, Calif., died peacefully on November 12, surrounded by her family members. Luella was born and raised in Omaha, Nebraska, the third of four children of her parents, Emil and Luella. After graduating from South High School in Omaha, Luella attended the University of Nebraska, Omaha, when it was a municipal college, before she moved to La Jolla, Calif., where she met her husband of 61 years, John. They were married at Luella's home church, St. Luke's Lutheran Church in Omaha. Luella served as the society editor for the La Jolla Journal, a weekly newspaper, and took additional college courses at Palomar College in San Diego and Allen Hancock College in Santa Maria, Calif. Luella also worked as an executive assistant for the civil engineering firm of Freeland, Peterson and Evanson in San Diego and later as an administrative assistant for public affairs for GTE (now Verizon) in Torrance, Calif., for more than 10 years before her retirement in 1994. Luella and John spent cherished valuable time telling stories to and sharing memories with their children and grandchildren and the blessings of laughter that they impart. John often told them that his life began when Luella came into his life, and Luella often said she knew from the very first time she met John that life would always be exciting and never dull when she was with him. For more than six decades, their marriage has been a living testament to the importance of their Christian faith and their faithfulness and devotion to one another, as well as their commitment to their children and grandchildren, extended family and their community. John and Luella always shared their optimistic, forward-thinking outlooks toward life which they have always sought to share with others through volunteer efforts. Throughout their lives, they have modeled a living faith: to love God fully and completely and to love others in response to Christ's life-giving and transforming love. They have always sought to provide a moral and ethical example through lives of integrity, sincerity, humility, loyalty and unconditional love, and they have spent their retirement years enjoying the simple pleasures of life, especially spending time with the joys of their lives---their children and grandchildren. Luella is survived by her husband; the couple's five children, William, David (Sandra), Joan (Michael), Edward and Nancy; eight grandchildren, Andrea (Paul), Jake (Sierra), Ryan, John, Alexandra, Samuel, Glenna, and Cody; her younger brother, Emil (Jeri), and sister-in-law, Bette; and numerous nieces and nephews and cousins. She is predeceased by her parents; her older siblings, Helen, and Ed; and the couple's oldest grandchild, Zak, whom the couple lost in a motorcycle accident several years ago. The couple celebrated their 50th anniversary with family members in Palm Springs, but they requested a more subdued gathering every subsequent anniversary. At their advanced age, the couple said, every day is a gift and a celebration.