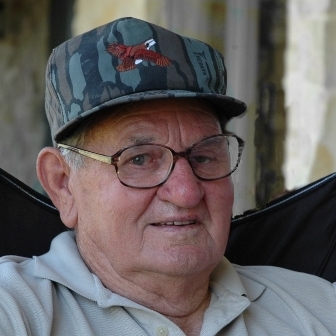 Lowell Lavaughn Ramsey born at Row, Oklahoma November 13, 1926 to Walker and Levy Ramsey. He graduated from Colcord High School in 1944. Sixty-six years ago he married Geneva Doughty in Quartzsite, Arizona. They raised their four daughters and one son in Lawndale, California, where they have resided the last 65 years. Lowell is survived by his wife Geneva; his four daughters, Karan De Friez, Lavonda Heredia (Ed), Chris Lapp (Bill), Jody Wilson (Dave), and his son Dennis Ramsey (Shoko); his nine living grandchildren, Rod Combest, Steve Henry, Brent Heredia, Kevin Lapp, Craig Heredia, Eric Henry, David Wilson Jr., Todd Lapp, Stephanie Heredia Ereth; and 17 great-grandchildren. Lowell worked as a carpenter for 35 years. He and Geneva traveled all over the US and visited Canada, Japan, China and Mexico following retirement. Lowell enjoyed singing and listening to gospel music, loved telling funny stories, and had a contagious sense of humor that kept his family and friends laughing. He is preceded in death by his parents, nine siblings and one grandchild, joining them all in heaven for a glorious reunion. Visitation will be Friday, May 9, 2014 at White and Day Colonial Mortuary, 901 Torrance Blvd. Redondo Beach, California, from 5:00 p.m. to 9:00 p.m. His memorial service will be held at Rice Mortuary, 5310 Torrance Blvd. Torrance, California, on Saturday, May 10, 2014 at 9:00 a.m. with a reception to follow. He will be interned at Pacific Crest Cemetery, Saturday May 10, 2014 at 12 noon.