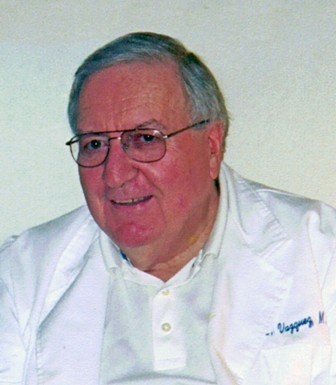 Louis R. Vazquez, M.D. April 2, 1929 – February 21, 2017 Louis R. Vazquez was born in Buffalo, New York, April 2, 1929, and passed away peacefully at his home on February 21, 2017. A first generation American – his parents Mary and Raymond Vazquez emigrated from Spain - Louis graduated from Conisius College in 1951. He worked for the Ford Motor Co. for a brief time, then moved to California to join his family, who had relocated there several years earlier. He has made California his home for the past 65+ years. In 1953, Louis was drafted by the Army during the Korean War and was on his way to serve when the peace treaty was signed. He served his remaining time in Kyoto, Japan, where he worked at the Kyoto Army Hospital. While Louis was interested in becoming a doctor, it was his work there that further inspired him to pursue a career in medicine. After his military service, Louis secured a position as an orderly at Cedar Sinai Hospital in Los Angeles. It was there that he met his wife Thelma J. Blohm, an operating room nurse. The medical staff at Cedars Sinai encouraged him to pursue medicine, so he applied to medical school and was accepted by Howard University Medical School in Washington, D.C. , and received his medical degree from the College of Medicine in 1961. Upon returning to Los Angeles, Louis interned at the Los Angeles County Hospital. He continued his medical training, specializing in Orthopedic Surgery and completed his residency at the Long Beach Veterans Administration Hospital. Louis was a Diplomate of the American Board of Orthopedic Surgery and Fellow of the American College of Surgeons. He had a private practice in the South Bay for nearly 50 years. Dr. Vazquez was also an ardent supporter of Howard, and was an active member of the HU Medical Alumni Association (HUMAA). While medicine was his passion, Louis also found time to volunteer. He was a reserve officer with the Manhattan Beach Police Department for many years and also donated his time volunteering at a clinic in Calexico. He also loved USC football, his family and especially his grandchildren. Louis is preceded in death by his mother and father, Mary and Raymond Vazquez, and sister, Eleanor Bienlein. He leaves behind his wife of 55 years, Thelma J. Vazquez, children Maria V. Calhoun and Louis R. Vazquez, son-in-law Tony Calhoun, and grandchildren Tucker and Lauren Trainer, and Christopher and Julie Vazquez. Services will be held at 1:30 pm on Friday, March 17 at American Martyrs Church in Manhattan Beach. In lieu of flowers, a donation in memory of Louis R. Vazquez may be made to Howard University Medical School, 2225 Georgia Avenue, Suite 901, Washington D.C., 20059.