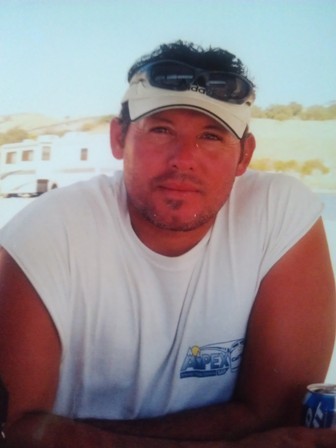 Lou (Louis) Nathanial Silva passed away on July 31st, 2013. He was born in Tucson, Arizona on August 27th, 1962. He is survived by a daughter, Lauren; a son, Dylan; his mother, Olivia; father, Louis B. Silva; three sisters, Debbie, Laura, and Annette; and his stepfather, Michael. Lou is also survived by his mother's brother, Armando and her sister, Yolanda. In addition, he is survived by eight nieces and nephews and ten great nieces and nephews. He will be sadly missed by Robin, whom he spent the last few years with. Lou spent most of his life in the Manhattan Beach area. He attended Pennecamp and Meadows and graduated from Aviation High School. He also attended El Camino College and Long Beach State. As a boy, he often fished with his grandfather, "Tata", whom he was very close to. Lou loved the outdoors-especially the ocean. He surfed, water-skied, played beach-volleyball. Lou loved to jog on the beach. Among other things, he was a martial-arts instructor. He loved sports, especially college basketball and football. He played football at El Camino College. Lou could build or plant anything and just about did. He resided for a short time in Tucson, Arizona and in Carlsbad, California. Lou was more than a son, a brother, a father, an uncle, a cousin, a nephew, or a good friend - he was the light in the dark - the calm in the storm - he was wise beyond his years. Was he perfect-no but he tried to be the best he knew how. He was a private person, not one to boast or brag. Think of Lou with gratefulness that you knew him. We'll all remember those precious moments; the fun times as well as the tough times. In some way he made all our lives better. He will truly be missed but ever so fondly remembered.