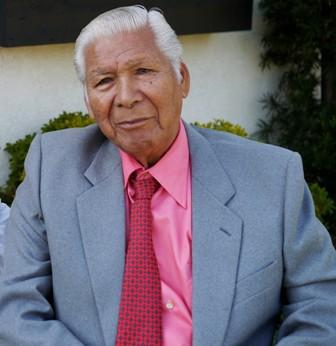 Louis M.Valles, a life-long resident of the South Bay, passed away on Thursday, November 22, 2012 in Torrance. Born in San Fernando, CA, Louis was 90 when he died. Louis had served in the Army during World War II in the 312th Fighter Control Squadron, in Europe. He brought back Cecile as his war bride and "souvenir of the war". He worked for over 30 years as a blacksmith at Shell Oil Co. He enjoyed working in his garden and loved his family very much. Louis is survived by his daughter, Jeannine Harris of Torrance, CA; sisters, Natalie, Virginia and Susanne; his grandchildren Jared Harris and Jeanessa Blair; and three great grandchildren Kendalyn, Wyatt and Houston. He was preceded in death by his son, Steven Valles; and wife of 62 years, Cecile Valles. The Service will be held at White & Day Colonial Mortuary in Redondo Beach on Friday November 30, 2012 at 1pm. Burial will follow at Pacific Crest Cemetery in Redondo Beach.