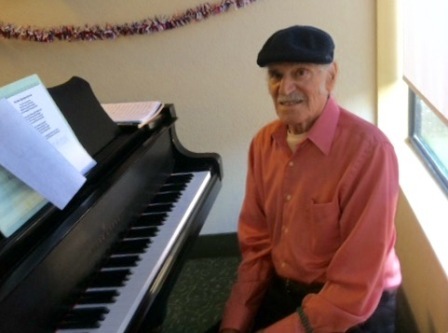 Louis "Lou" LaRocca, age 93 died peacefully at home in Torrance on Wednesday May 6, 2015 with his loving family at his bedside. A 65 year resident of the South Bay, Lou was preceded in death by his wife Sandra LaRocca and survived by his four children Louis LaRocca, Jr., Sandra Patrick, Lenny LaRocca, Gina Bullock as well as five grandchildren and two great grandchildren. A lifetime musician, Lou studied Music at Duquesne University in Pittsburgh. After graduating he served in the Army during WWII as a member of the Army/Air Force Marching Band. He moved to the South Bay shortly afterwards and began his career as a pianist. Well known in the surrounding LA area, his playing piano has been enjoyed by many for well over 65 years. A gathering of family and friends will be held on Tuesday, May 12, 2015 from 6:30pm to 9:00pm at Rice Mortuary, Torrance, CA with the Rosary at 7:00pm. Committal will follow at Holy Cross Cemetery in Culver City, CA on Wednesday, May 13, 2015 at 11:00am with a reception to following immediately thereafter at Rice Mortuary.