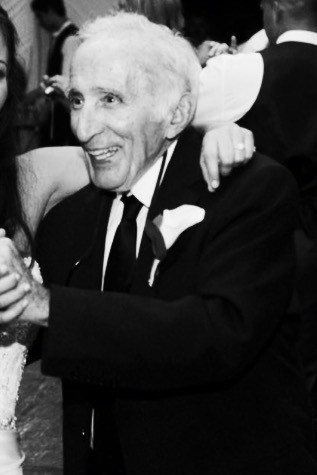 Louis "Louie" Anthony DeRosa was born to Cesario and Mary DeRosa on November 13, 1924 in Boston, Massachusetts. Louie spent his youth in Boston before joining the Navy in 1943. He served during World War II, stationed on ships off the coast of California, Hawaii, and Japan. Louie was honorably discharged from the Navy in May 1946. In 1951, Louie was introduced to Concetta Aurelia Barresi. After a 3-year courtship, they were married in Italy in December 1954. The newlyweds moved to Quincy, Massachusetts and welcomed baby Frank, the first of five children, in April 1956. Having fallen in love with the California weather while in the Navy, Louie decided to move his family to California in late 1956. The family settled in Gardena where they were blessed with the births of John, Louis, Marie and Michael. Louie worked as a car salesman and later as an industrial supply salesman before opening Gardena Welding Supply in 1981. Louie was active in the business for the rest of his life, joined by his children. Louie was also active in his community and church, known affectionately as the honorary mayor of Gardena. Louie was predeceased by his parents and his son, Louis. He is survived by his wife, Concetta DeRosa; children Frank (Gina) DeRosa, John (Nadine) DeRosa, Marie (Richard) Blanco, and Michael DeRosa; grandchildren Amber (Max) Flowers, Jackie (Juan) Jurado, Lauren Blanco, Christine (Josh) Miller, Devyn Sidell-DeRosa, Ashleigh DeRosa, Alison DeRosa, Natalie DeRosa, Michael DeRosa; great-grandchildren Riley Young and Jonathan Jurado, and many beloved nieces and nephews.