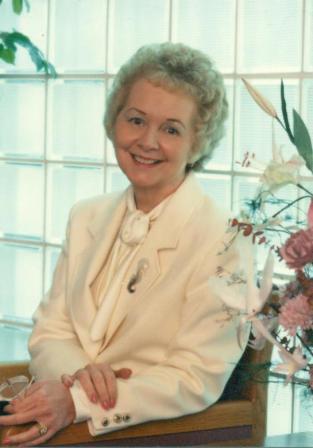 Lora LaVon Sutton Lora "LaVon" Sutton, beloved wife, mother, grandmother and dear friend passed away peacefully at home on September 21, 2014 while holding the hands of her surviving son and daughter-in-law. Born in Los Angeles, CA to Howard and Evelyn Heth, LaVon was 84 at her time of passing. LaVon graduated from Manual Arts High School in 1949. It was soon after graduation that she met the love of her life, William (Bill) Sutton. Married in 1952, LaVon was devoted to her loving husband for 62 years, cherished and respected by her two sons, Jeff and Greg, and by her daughter-in-law Laurie. She was most proud of her grandson, Graham and his endless youth adventures. A lifetime active member of the South Bay Hospital Auxiliary, LaVon became president of the Hospital Auxiliary in 1982, then Director of Volunteer Services for the AMI South Bay Hospital until her retirement in 1992. Even in retirement she was a regular "Monday" girl with the Hospital Auxiliary. In 1990 LaVon was honored by the South Bay as Woman of the Year, an honor she was very humbled by. LaVon served on the advisory board at the Redondo Beach Salvation Army and was active in numerous philanthropic activities and other volunteer positions with Hawthorne Wiseburn PTA, Hawthorne Pop Warner and Little League organizations. LaVon had many passions which included volleyball on the beach in Hermosa; weekends at the family cabin in Running Springs; annual Christmas candy making with the girls; and traveling/cruising the world with Bill and their many friends. LaVon was a lifelong Trojan and a regular supporter of the USC Marching band. LaVon loved her football and spent many Saturdays at the coliseum tailgating and cheering on her Trojans. Very special thanks to her care givers Mina Trinidad-Samson and Victor Mariñas, along with her long time primary care physician Dr. F. Lee Reitler and the entire home and hospice nursing teams at Torrance Memorial Hospital. In lieu of flowers donations may be made to the Redondo Beach Salvation Army, noting LaVon's name on your check. The family is planning a celebration of LaVon's life at a later date. They were not prepared to lose her so soon after Bill's passing on June 3, 2014, but rejoice in the blessing of having them both in their lives. If you listen, you can still hear mom's laughter. Thanks for all the love and fun, we love you mom! Fight on!!