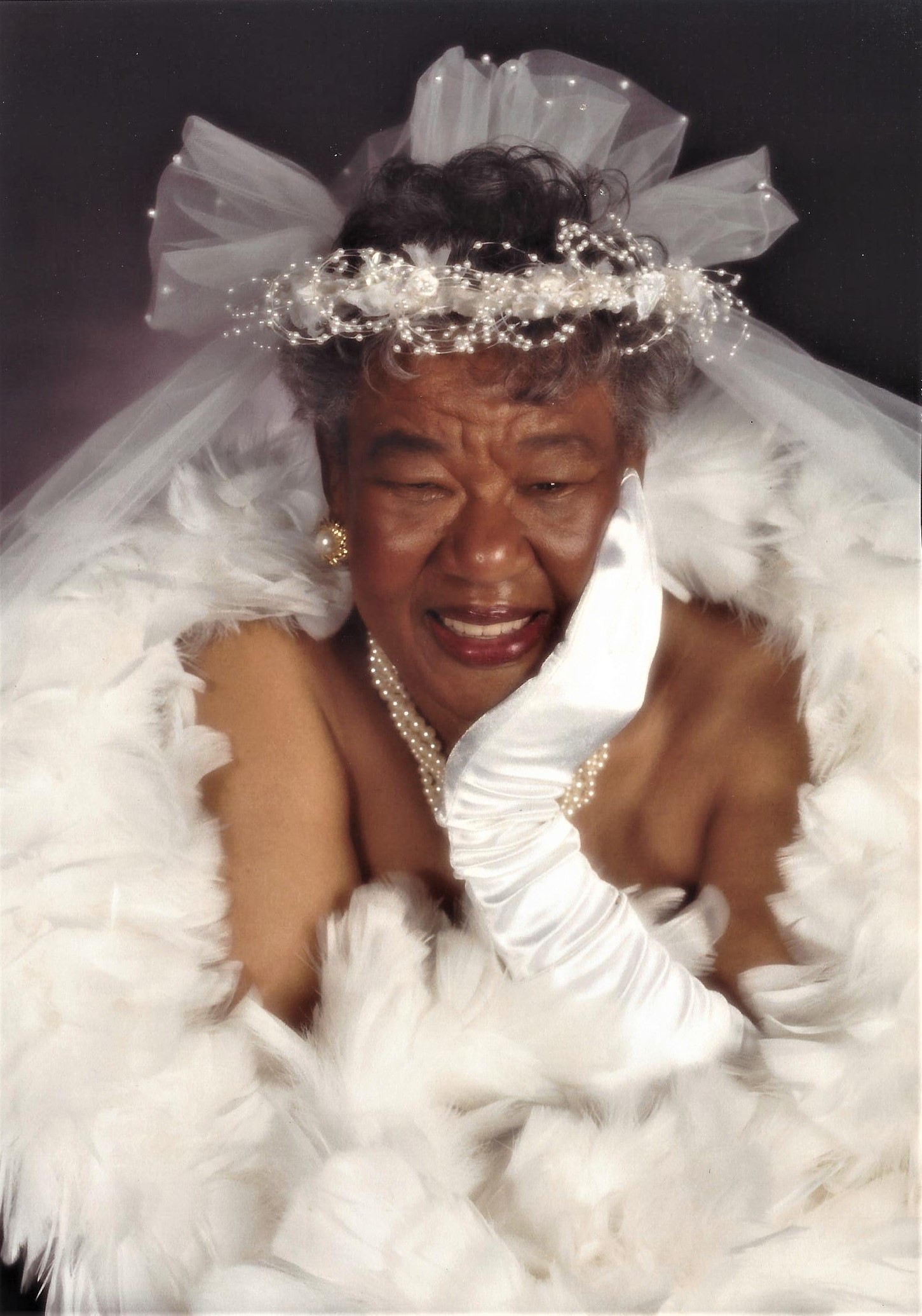 The life of our beloved Sister, Sister-in-Law, Aunt, Aunt-in-Law, and Cousin, (Loxi) Lois Geraldine Barrow, began on January 10, 1944, in Belize City, Belize, formerly British Honduras. She was the second child (of 7) born to the union of Patrick Sr. and Effie Barrow. She was predeceased by both of her parents. Up until 1961, Lois lived with her grandmother, Adriana Trejo. On the night of Hurricane Hattie in 1961, Lois moved with her parents and siblings to the family’s new residence on New Road, fondly known to this day as “Barrow’s Hall”. Lois subsequently went on to be well known and respected by the many people who passed by the family’s residence daily, because her favorite place to sit and “observe” the passersby was on the “front verandah”. She made many friends sitting on that verandah over the years, and everyone, young and old, knew her by her name. If Lois was not sitting in her favorite spot, folks would get concerned and would ask, “Weh Lois deh?”

She continued to live at Barrow’s Hall until she, and her younger sister, Sherryl, were taken to Honduras for a short period. They were returned to Barrow’s Hall soon after, till both Lois and Sherryl moved to Los Angeles, California to join their dad. Lois traveled with a family friend from Belize to Los Angeles. She soon became an interstate and international traveler as she traveled with her dad to countries such as, Canada, Germany, and Great Britain; and cities and states such as Las Vegas, Nevada; and Columbus, Georgia. She was subsequently relocated to Kentucky. She lived with her dad until he passed away in December 1999. During this period, her Sister-in-Law, Mary, ensured that all of Lois’ personal needs were met. (Thank you, Mary, for always being there for Lois and Daddy, as well as for the rest of the Barrow siblings). Also during same period, often times on weekends, her brother, Bunny would pick up Lois and daddy and took them to his home in La Puenta, California, and Apple Valley, California. They would attend church service with Bunny and his family on Sundays before returning to Los Angeles. Lois’ Sister-in-Law, Teresita, used to go to Los Angeles to help to clean up Lois’s room and cooked meals for Daddy and Lois. (Thank you, Teresita, for all those times that you too helped Lois and Daddy.) January 2000, Lois went to live with her brother Guy (deceased) and his wife June, and their family for about 6 months in Compton, California. {Thank you, June, for taking care of Lois during this period.) Lois subsequently moved to Shelbyville, then to Louisville, Kentucky to live with her younger Sister Sherryl, (who later became her Legal Guardian), in the latter half of that same year. Lois traveled with her brother, Patrick to Louisville. On the flight from Los Angeles to Louisville, Lois experienced an “anxiety attack”. Fortunately for her, there was a medical doctor on board who immediately jumped into action and informed the flight attendants to tell the pilots to divert the plane to Oklahoma so that Lois could get medical assistance. Patrick and Lois stayed a full day in Oklahoma until Lois’ condition stabilized and she was cleared to resume her travel to Louisville. She remained in Kentucky until her passing. For 21 years, Sherryl cared for and made her Big Sister Lois, her number one priority. Sherryl took exceptional care of her Big Sister, even when Lois no longer lived in the same home with her. Lois wanted for nothing. Lois’ surviving siblings, Patrick, Bunny, and Shereda, do not have sufficient words to express our sincere appreciation for our Lil Sister Sherryl, for the time and love that she showered on our Big Sister over the past 21 years! We hope that she knows just how grateful and indebted we are to her for her dedication to our Big Sister, Lois.

Lois lived a very fulfilled and happy life. The first time that Lois attended an “educational-type” institution for people with learning disabilities in Los Angeles, she was already an adult. She loved every minute of her time there, from getting up in the mornings to waiting to be picked up by the bus, through learning the tasks she was taught at the workshop, to the friends that she made at the workshop, and the paychecks she received. Lois even had several pieces of her “artwork” sold while going to the workshop in Los Angeles. She especially enjoyed getting “paid” at the end of each week! When she moved to Shelbyville, Kentucky to live with Sherryl, she was placed in another workshop where she was given tasks such as sorting/separating newspapers and assembling metal buckles that were later used to secure pallets of milk from Dean Foods, the largest dairy subsidiary company in the United States; she also learned some other skills. In doing all the assigned tasks, Lois paid close attention and learned each assignment to the best of her ability. She worked diligently so that at the end of each week she would receive a paycheck. Her time at both workshops brought her so much joy and there was never a day that she woke up not eager to go to either workshop. Her demeanor and pleasant attitude at both workshops earned her many accolades. But Lois was also very mischievous and sneaky, and on several occasions, got herself into “trouble”, once resulting in a 2-day “suspension”!

Lois loved music and she loved to dance. She had many favorite singers and genres of music, but her #1 overall FAVORITE was Elvis Presley. One of her favorite Elvis songs was, “Love Me Tender”. She would sing this song at the top of her lungs, making up her own words, while staying in tune with the melody. She was also an avid letter writer; she wrote hundreds of letters, many of them to Elvis that she ensured were placed and sealed in envelopes and were placed in the mailbox to Elvis. No one knows if Lois ever expected a letter back from Elvis; nonetheless, she kept on writing and “mailing” her letters (someone had to always retrieve the letters from the mailbox before the mailman arrived.) But she remained a Belizean at heart; so, calypso, reggae, soca and jump-up music got her on her feet quickly, no matter where she was, at home, at parties, visiting friends, in the store; you name the place, if the she heard the beat, you can be assured that she will immediately jump to her feet and begin to tap her feet and sway to the music. She also loved to “wine” to the beat of “Nanny Wine”, the song made famous by Byron Lee and the Dragonaires. One of her favorite Belizean artists is Lord Rhaburn. She loved others also, but many of Lord Rhaburn’s songs resonated in her spirit and stayed in her memory. Lois went to many dances and parties with her dad; and she was often the life of the party.

Most of all, Lois loved to celebrate her birthday! Her birthday was her “special day”! Every year, Lois knew that when she woke up on Christmas day, that shortly thereafter would be her birthday. So, beginning the day after Christmas, Lois reminded everyone she encountered that her birthday was coming. She also loved to receive gifts; two of her favorite gifts were sparkly rings, and dolls with long hair for her to brush and comb, respectively. All the other gifts that she received, as much as she appreciated receiving them, paled beside the rings and dolls. And on the day of her birthday, she enjoyed having everyone serenade her by singing the “Happy Birthday” song to her. When Stevie Wonder released his “Happy Birthday” song, that became a new favorite of Lois. Over the years Lois has amassed a collection of at least 90 rings; and she made sure that she wore them all, in rotation. Everyone who knew Lois, knew that she had a life-long affinity about “getting married” and wearing a “bridal gown”. She loved looking at the bridal gowns in Bridal magazines. When she saw a bridal gown that she liked, she would tear out that page and taped it on her bedroom wall. Over the years, in her mind, she had many “boyfriends” to whom she vowed to get married to. Some were lawyers; some were doctors; and some were her bus drivers. It mattered not that the men were married, when Lois set her eyes on that person, she talked about him over and over…. that is, until she found a new “love”. Lois. Lois’ long-term memory remained very sharp. She would remember events from her childhood while living with her grandmother, and she would remember the names of everyone who were around at the time. For this reason, her “prospective husbands” were always memories from her distant past.

While at the workshop in Shelbyville, KY, Lois attended annual formal galas put on by a local non-profit organization. Before each gala, the folks from “Glamor Shots” would volunteer their time to dress and do makeup for the participants and took their pictures. Every year, Lois’ “Glamor Shots” were even more “glamorous” than the year before. They brought out the beauty that Lois possessed, and she would always have a ball being pampered and dressed up and posing for photo shoots. One year for her photo shoot, Lois got to wear her bridal gown. Her dream came true that day as she was “prepped” for her photo shoot. She was a beautiful “bride”.

As time went on and Sherryl’s health became a challenge, Lois was placed into group homes with no more than 2 other residents at a time, first in Shelbyville, then in Louisville. Until about 6½ years ago when God sent us Ms. Anita Johnson. What a wonderful blessing it has been. Anita has cared for Lois as if Lois was her own “flesh and blood”. We, Lois’s siblings, will be forever grateful for the care, love, and kindness that Anita showed to our Big Sister while caring for her in her home. Thank you, Ms. Anita Johnson.

And in her own special way, Lois loved the Lord. When she was able to attend church with Sherryl, Lois was never shy about singing praises to the Lord or raising her hands in praise. She may not know all the words to the songs, but she sung in tune with everyone. When it was time to pray, she prayed out loud with everyone else. At the church she and Sherryl attended, Lois was allowed the freedom to praise and worship God in her own special way. Lois also attended church and Bible Study with Anita. For this reason, we know that Lois’ spirit is in heaven with her Lord and Savior, Jesus Christ.

While living in Louisville, Kentucky, Lois became a Naturalized Citizen of the United States. This was a major accomplishment for Lois. She entered the United States as a citizen of British Honduras; she left this earth as a Belizean-American citizen, only by the grace of God.

Early Monday morning, on September 20, 2021, Lois departed this life peacefully while being hospitalized at Norton Hospital, in Louisville, Kentucky. She was 77 years young.

We loved Lois; but God loves her more. She is absent from the body; but we know that her soul is home and present with the Lord. Our sweet Sister, your soul rose in glory, and now your weary body of clay will rest in peace for eternity.