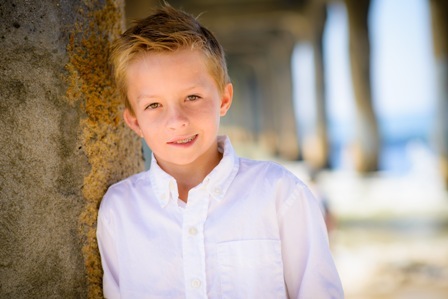 Logan Eric Goodwin was born on July 10, 2004, in Long Beach, California to Todd and Joann Goodwin of Hermosa Beach, California. Todd is originally from Haverhill, Massachusetts, and Joann is originally from Huntington Beach, California. Logan passed away on April 9, 2017, following a skiing accident in Colorado. Logan had a variety of loves and was an avid sports fan. His favorite sports included football, hockey, skiing, and baseball. He enjoyed going to LA Kings games with his father, watching the New England Patriots with his family, playing baseball in the Hermosa Beach Little League, and mastering his trampoline flips. Spending time at the beach, skateboarding, and swimming were also among Logan's favorite activities. He was looking forward to trying out for Junior Lifeguards. He loved walking to the pier with his dog, Summer, and going to the movies with his mom and sisters. He was very proud of being on the honor roll at school. Logan always jumped into his activities with enthusiasm and a big smile. Logan was always "that kid" . . . That kid who would make sure the youngest children at a party were included. That kid we could count on to lay out for a catch. That kid who always had a funny joke and a quick smile which could light up any room. That kid who, after his sisters were tucked into bed, would sneak in to hug them, tell them he loved them, and say goodnight. He had his mother's kindness, his father's energy, and their combined passion and love. He was a wonderful son, loving brother, and loyal friend. Logan's passing is a loss to everybody in the community. He was a mentor for our children and an example of what they should strive to be: humble, kind, compassionate, funny, smart, driven, loving, confident, and true. Logan touched everyone around him from the youngest children to the eldest adults. Although Logan completed his worldly mission faster than many, he succeeded in ways most people can only dream of. He was blessed with everything, except the blessing of a lengthy life. Logan Eric Goodwin will never be forgotten. Logan is survived by his loving parents, Todd and Joann Goodwin, and his adoring sisters, Alexa and Sienna, of Hermosa Beach, California. He leaves his paternal grandmother, Jane Kennedy of North Conway, New Hampshire; paternal grandfather, James Goodwin of Newton, New Hampshire; maternal grandmother, Ingrid Anthony of Huntington Beach, California; his aunt and uncle Christine and David Rolfe of Fountain Valley, California; and his cousin Darren Rolfe of Fountain Valley, California. He was predeceased by his paternal uncle Eric Goodwin and his maternal grandfather William Anthony. In lieu of flowers, donations may be made to the Logan Goodwin Memorial Fund via Gofundme.com . Logan dedicated his life to helping those around him. As such, donations will be directed to improving schools and facilities in Logan's hometown to help future generations of children. Calling hours will be held on Thursday, April 20, 2017, from 5:30 pm – 9:30 pm at Rice Mortuary, 5310 Torrance Blvd, Torrance, California 90503. Logan's memorial service will be Friday, April 21, 2017, from 12:30 pm – 1:30 pm at Journey of Faith church, 1243 Artesia Blvd, Manhattan Beach, California 90266. A reception will follow from 1:30 pm – 4:30 pm at the same location.