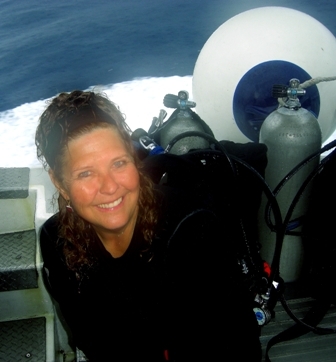 We lost a friend on Thanksgiving Day 11-24-2016 at 1:11pm. We lost a mother, a wife, a companion. Someone who loved people and had great empathy for others. So much so that she would sometimes actually feel ill after helping a friend with their emotional problems. I don't think there is a person who did not like her. I don't think I ever heard her say a bad word about anyone. She saw only the good in others and always was the first to help. She dabbled in the metaphysical world and I think really was an angel. I feel very fortunate to have known her. She raised my game through kindness, compassion, thoughtfulness, and just plain friendliness. She was fun loving, cheerful, helpful, nonjudgmental, and convivial, She had an endearing none threatening personality that quickly broke down barriers people have when you first meet them. I guess it was fate that brought us together. She and her sister Alyse liked sports and were into water and snow skiing, scuba diving, windsurfing. And so was I. This was a perfect match and probably really was made in heaven. I think it was fate that brought us together. We had 27 wonderful years together and as each year came and went, the next one was even better. We rarely argued but tolerated our few differences which were greatly outweighed by our commonality. Unlike some couples our interests, politics, needs, and desires, were very similar. Often during a conversation we would be thinking the same thing. We were very compatible as the saying goes. Before I met Lise she had been in the craft show business selling jewelry back when you could make big profits on a weekend. She ran a jewelry shop on Catalina and went to Bali getting products made. When craft shows became unprofitable, she worked as a bar tender at Tony Roma's and would bring beef rib bones home for my dog Mako who literally wore his teeth down enjoying them. She grew up in Elysian heights with her twin sister Alyse and brother Robert and would tell me of taking lessons and having to lug an accordion up the steep hills there as a young teen. As our love grew, so did our love for the mountains, and water. Water was a common denominator for us. We skied on it liquid or frozen and swam underneath it on the many trips we took. Like we always said, "same planet but a different world down there". I think Lise was happiest when we were diving with me scrounging round in the reefs looking for stuff to take pictures of and Lise a bit above and behind me making sure I was safe and within range of our friends. She was my guardian angel above and below the water and had logged right at 600 dives in the Caribbean and south pacific. I and many others have beautiful memories of Lise and I will cherish and never forget them. I can't help but think that she is looking down on me as I write this for she really is an angel sent down here to make people's lives she touched that much better. God's speed Lise, our son Kaden and I loved every minute of our time together and one day hope to be with you again.