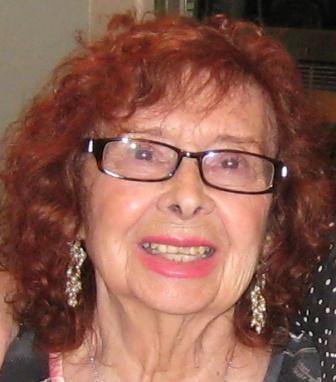 Lillian Gladys Cutter, entered Heaven's Gate on Wednesday morning, October 3, 2012. Lillian passed from fatal injuries sustained in a fall. Lillian was born March 5, 1920 in Johnston, Rhode Island. She moved to California in 1947 until moving to Colorado in 1980. In 1982 she relocated to Nevada where she lived until 2001 when she returned to California to live with her daughter, Diana Jefferds, who lovingly cared for her the last 11 years of her life. She is survived by her three children: Lola Sather, Diana Jefferds and Raymond Ellithorpe; son-in-laws: Larry Sather and Gary Clavio; grandchildren: Larry Sather Jr, David Sather and Steven Sather; Todd, Cory, Brad and Kristi; Jennifer and Jeff Thies, Brett Clavio; and great-grandchildren: Jeff Sather, Josh Sather, David Sather, Mandi Sather, Kaylen Sather, Hailee Sather, Carley Sather, Lexi and Logan Sather, Jackson and Emma Thies; along with numerous Ellithorpe, Scaramuzzi and Napolitano nieces and nephews. She was preceded in death by her mother, Maria (Mary) Pitocco and her father, Joseph Scaramuzzi; her brothers Anthony Scaramuzzi, Frank Scaramuzzi, Harry Scaramuzzi and sisters, Anna Napolitano and Helen Cogugno; husbands Joseph Lapolla, Raymond Ellithorpe and Howard Cutter. Mom was everyone's mother and she went by many names: Lil, Lillian, Lily, Diamond Lil, Sister, Auntie, Mom, Grandma and Greatgrandma. Lil had no prejudices, age, race, or religion didn't matter to her. She accepted everyone. Her favorite expression when planning anything was "If God Wants". She loved music, loved to dress in evening gowns and go dancing but also loved stuffed animals, cartoons and of course watching westerns. Her favorite "cowboy" was John Wayne and she had almost every one of his movies. Mom could watch westerns from early morning to late at night. She was fearless in living her life whether hiking in the forest by herself, climbing on the roof of her home in Nevada at 80 years of age to fix her swamp cooler or feeding coyotes by hand. Lillian walked as one with nature and loved her time in Nevada, working on her property, planting another tree or hiking in the foothills, she was in her element. She enjoyed having animals. She hatched chickens from eggs, always had dogs, cats or birds. Any animal she loved. Mom loved Italian food and some of her specialties were making Lasagna or sausage and peppers. Anyone who had either of these loved them. She spent time crocheting, making her own jewelry, especially loving long dangling earrings, and also loved fixing things. Anything that was broken she tried to fix. She loved to read or watch her numerous "Westerns". Her favorite snack was CANDY in capital letters! She loved to go to the Dollar Store and buy all the "old time" candies. She would chew JuJu Bees or Juicy Fruits which would crack most everyone else's teeth but the candy never bothered her. See's Candy was her ultimate favorite and she would eat it until she'd say she thought she'd bust…that was her favorite treat to herself. Also, she loved her "garbage magazines and was always quoting something she read in them which she always believed. She was a member of St. Andrews Presbyterian Church in Redondo Beach, CA which she loved and which they returned in abundance. The Memorial Service will be held there on Friday October 12, 2012 at 11am. In lieu of flowers please make donations in her name to: K.A.S.E - Keeping Animals Safe Everyday, P.O. Box 682, Thousand Palms, CA 92276; to World Vision, www.worldvision.org; or to Habitat for Humanity, www.habitat.org.