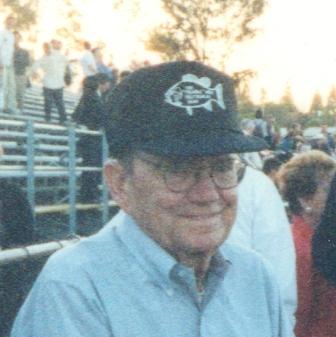 Lester Dean Vickrey, a 54 year resident of the South Bay, went home to be with the Lord on March 29, 2012, at age 88. Born in Buffalo, AR on January 6, 1924, he was 12th of 21 children. His early years were spent in the Ozark Mountains of AR and Claremore, OK. A Purple Heart recipient, he served in the Army during WWII both in the US and Asiatic Pacific Theatre. Lester worked in construction for 30 yrs and was a 50 year member of Laborers' Union Local 802; retiring in 1989. He had a green thumb and enjoyed growing vegetables and roses. He also loved watching his favorite teams (Lakers, Dodgers and Angels) lake fishing and visiting with family and friends. His home-away-from home was Denny's in Gardena where he was known as Pops. Lester was preceded in death by his parents Thomas Richard and Mentie Evelyn Vickrey; wife of 57 years, Janie; son, Richard Michael, and 16 siblings. He is survived by his son, Robert Mark Vickrey; daughters: Catherine Ann (John) Shattuck and Debra Marie (Robert) Francis; grandchildren: Jim (Rachel) Shattuck, Maigan and Bobby Francis; 3 brothers and 1 sister. Lester, beloved and devoted husband, dad, papa and friend will be greatly missed by those he left behind. The viewing will be held at White and Day Mortuary in Manhattan Beach on Wed., April 11, 4 to 8pm. The Service will be held in the Pacific Crest Cemetery Chapel, Redondo Beach on Thurs., April 12, 11am with burial following. A reception will then be held at White and Day Mortuary in Manhattan Beach