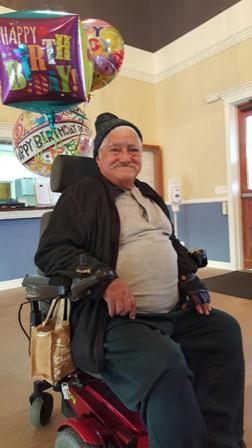 We are deeply saddened to announce the passing of our father and grandfather, Leonard Acevedo who has gone home to be with our Heavenly Father. After a long battle of constant illness, he went peacefully surrounded by family, on February 6, 2016. He is survived by his only daughter Nicholette Acevedo, his four granddaughters Cyndi Kanehailua (Robert), Sonia Holub, Sophia Moreno(David), Terah Acevedo and his 12 great grandchildren whom he loved unconditionally and whole heartedly. He is also survived by his loving sisters, Viola Rios, Margie Mendival and Bertha Gonzalez whom he loved so dearly. Leonard was born January 22, 1929 in Gardena, CA where he grew up and spent most of his life. He lived a long and happy 87 years. His love of music played a big part in his life where he learned to play the trumpet and was so fortunate to be able to play and conduct music shows all the way until his last year. He is recognized as a veteran having honorably served in the United States Army. He cherished his eldest granddaughter Cynthia Kanehailua who he had the pleasure of raising. Cyndi devoted herself to making sure he was well taken care of and always let him know he was loved unconditionally during his last years and days.