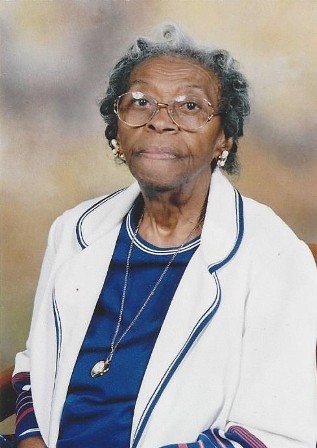 Funeral services will be held on Friday, February 26, 2016, 11:00 AM, at McCormick Mortuary in Inglewood, California for Leona Washington, 97, who died February 12, 2016 in Los Angeles, California. Interment will be at Immaculate Heart of Mary Cemetery in Lafayette, Louisiana. Leona Philomene Washington (nee Jones) was born to the union of Coralie Pierre Jones and Fernest Jones, Sr. in St. Martinville, Louisiana on July 21, 1918. Leona was a graduate of Holy Rosary Institute, Lafayette, Louisiana. In 1941 she married George Washington, Sr. From this union they had six daughters. As a member of Immaculate Heart of Mary Church, Leona participated in various activities. She was a member of the Rosary group, Legion of Mary, Altar Ladies as well as the KPC Ladies' Auxiliary where she had been a member since 1939. After her retirement, Leona was able to participate in various community activities. She was a member of the local AARP, Senior Citizens' Group, the Green House and the NAACP. She did a variety of volunteer work at Senior citizens' centers, nursing homes, food banks and churches. She was able to attend USL (ULL) and studied French, Guitar, Ceramics and Painting. She performed with senior guitar groups, had a French poem published and had some of her art work displayed publicly. Because of declining health, Leona moved to Los Angeles in 2002. She attended Circle of Friends Senior Day Care Center for several years and enjoyed neighborhood walks. She attended St. Frances X. Cabrini Catholic Church and kept busy by maintaining contact with old friends and family. Leaving to cherish her memory are her daughters, Krisida Nishioka (Wayne), Coralee Singh, Francine Shivers (Paul), Kathleen Ibarra, stepdaughter, Geraldine Broussard and devoted daughter-in-law, Ethel Washington, sister-in-law, Lorenzita Jones, one aunt, Sarah Silas and many nieces, nephews and cousins. She was blessed to see her 19 grandchildren grow to adulthood and to welcome the births of 22 great-grandchildren. She was preceded in death by her parents, her husband, George, her daughters, Charlotte and Jevetta, her step son Donald Washington and her siblings, Marie Azare, Antonia Washington, Cleona Hardy, Bertha, Clarence, Peter, William and Fernest (Jr.) Jones.