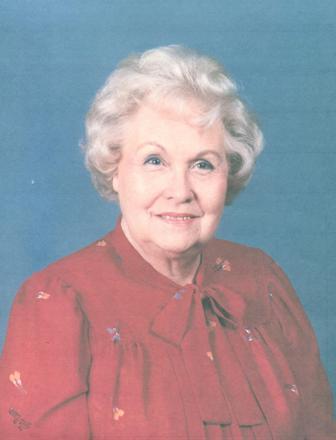 Leah Ashford died Sunday September 28, 2014 at the age of 90, as a result of kidney failure. Leah had been on hospice since September 9. She was born in Arkansas on October 2, 1923. At the age of 9 she moved to Texas. Leah met Fred Ashford in 1940 while attending Longview High School in Texas. She and Fred were married July 1, 1942, before his departure overseas. While Fred was overseas she spent much of her time in Washington State with the other wives in Fred's combat unit. After the war she returned to Texas with her husband so he could finish his college degree. Leah was a loving wife, mother and homemaker. She enjoyed cooking and made sure her family was taken care of. When her children were young she was active in school functions and the local PTA. Leah is extremely religious and one of her greatest ambitions was to help others. In 1974, Leah became President of the Houston A&M Mothers' Club "giving back" to the school that gave an education to both her husband and son, Bruce. She is definitely a "Daughter of the King"; Leah is kind, generous and benevolent. In 1975, Leah moved from Texas to Los Angeles with her husband. In 1976, Leah became a member of Neighborhood Church in Palos Verdes Estates, where she served as an Elder for many years. Leah is survived by her sons, Gary and Bruce. In recent years she became an active member of PEO (a philanthropic organization) and has remained active throughout her illness. A gathering of family and friends will be held at Rice Mortuary on Wednesday, October 1, 2014 from 4:00 pm to 8:00 pm. Burial will follow at Green Hills Memorial Park in Rancho Palos Verdes on Thursday, October 2, 2014 at 1:00 pm.