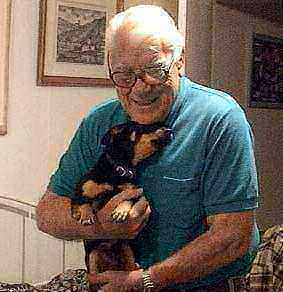 Kenneth Milton Haas A 63 - year resident of Manhattan Beach living in the home he built on 27th street since 1950, passed away Monday, March 18, 2013 at 5:05PM at the age of 89, a week short of his 90 fh birthday. Memorial Service & Luncheon for Kenneth wuill be held April 6, 2013 11AM - 3PM at the White & Day morturary, 3215 Sepulveda Blvd, Manhattan Beach, CA 90266 Ph 310 792-7575 Kenny was born March 24, 1923 in Moscow, Idaho to Zella Belle & Edmond August Haas. during a family move from Wisconsin to Portland, Oregon. At 3 years old his family moved to Bowman, North Dakota, and setteled on a dry farm outside of town, close to Kenny's grand father, s farm. His family lived there for ten years in a one room Shoddy. He said the winters were very cold and he had few friends to play with. A powerful Tornado struck and distroyed the farm the 10th year and the family moved back to Portland Oregon where Kenny graduated high school, played football and met many friends in Portland. He worked in a Chinese resturant before going to school to buy a car and have money. He enlisted in the Army/Air Corp. in World War II, and flew 25 missions over Germany as a nose gunner in a B24-D Liberator. On the last mission, Kenny's plane was shot-up by German fighters who damaged two of four engines flying the plane. The crew thought it was over, when up from above, a squadran of Tuskegee (Black) airmen, shot up the Germans and escorted them back to base. Kenny made a solemn pact with God, "If ever he got home, he would do his best to live a good and honest life, get married and raise a family." The war ended and Kenny finished out his enlistment around Los Angeles, where he met my mother and married her. They stayed together 54 years until my mother passed away. In 1946, Kenneth's father -in - law got him into the Motion Picture's Prop Makers Union Local #44. He worked on location sets building props for movies, played "extras parts", eventually becoming the lot manager for permanent construction at MGM Studios located in Culver City until retiring in 1985. My father was a soft spoken and kind man who would take time to help other people with thier projects. He loved sports as a young man and all through his life. He liked to play bridge, golf, fish, snow and water ski and surf the Manhattan Beach pier. He loved to play card games and take his family camping when ever he could. He even raced an old Ford coupe with a friend at Carol Speedway. He is survived by his two oldest sons, Kenneth Nicholas and James Edmond now living in Manhattan Beach, CA. He has three Grandchildren - Darren Haas of San Jose, CA; Heather Haas/Strauch of Scottsdale, AZ and Michelle Haas of Huntington Beach, CA. and five Great Grandchildren and his sister Vera's two daughters. He is proceeded in death by his Parents; sister Vera ninety four, his wife Eleanor seventy four, his youngest son Patrick William fifty two and his grandson Jason James Haas thirty two. His ashes along with the other five Family Members will be interned in a Haas "Niche" at Inglewood Park Cemetery in the near future. Please join his Family and Friends to celebrate and remember his lifetime - Saturday, April 6th, 2013 at 11AM in his hometown of Manhattan Beach, CA. Everyone please feel free to contribute any anecdotes you may recall. The Entire Kenneth Milton Haas Family