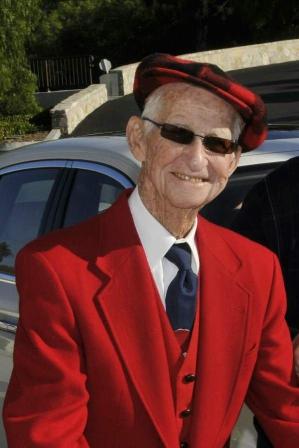 Kenneth F. Poiry passed Monday night, January 30, 2012. He is survived by his wife, Constance; sons Gib, David, Gregg and Phil; and grandsons Jonathan and Christopher. Ken and Connie celebrated their 75th wedding anniversary this past summer. In December we had the grandest 100th birthday party for Ken at the Palos Verdes Country Club with nearly 100 guests. Ken was able to get around to each table to talk with all the guests under his own power. He told us he had the "time of his life!" Ken was born December 24, 1911 in Fort Wayne Indiana. He met Connie in 1935 and they married a year later. After surviving the great depression he went to work for General Telephone Company (now Verizon) where he worked for 38 years. In 1959 he relocated his family to Torrance from Indiana for a milder climate as Connie contracted polio in the mid 1950's and could no longer stand the harsh winter weather of Indiana. After retiring he pursued his hobbies of golf, stained glass work and wood working. He built many full sized grand-father clocks for friends and family and he enjoyed constructing "Tiffany" style lampshades. He was also an usher at his family church, St. Lawrence for 40 years, most of those years he was the head usher. Ken also had a soft spot in his heart for an organization-STAR where he volunteered his time and talents. STAR exists for the good of our mentally challenged citizens. In lieu of flowers we know he would want donations sent to STAR, PO Box 1075, Torrance CA 90505. There will be a Vigil (Rosary) for Ken at St. Lawrence Martyr Church at 7:00 pm on Tuesday, February 7, 2012 and the funeral mass will be celebrated at 10:00am on Wednesday February 8, 2012 also at St. Lawrence with Fr. John Neiman presiding. A reception to celebrate his life will be held in the church hall immediately following the Mass. St. Lawrence is located at 1900 South Prospect Ave., Redondo Beach, CA 90277. There will be a grave side internment following the reception at Green Hills Memorial Park.