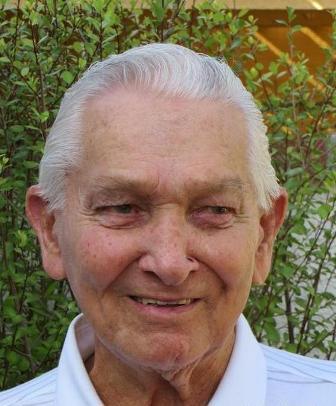 Kenneth Eugene Buth was born on July 13, 1922 in Redondo Beach, CA. He passed away peacefully in his sleep at the age of 92 on September 4, 2014 and will be missed and fondly remembered by family and friends. He retired from Chevron in 1983 and spent his retirement years doing what he loved to do, fishing and working on projects in his garage. After a day of fishing he loved to sit down and have a glass of his favorite wine, Cabernet Sauvignon. Mr. Buth is survived by the following family members: David Buth, son, and his wife Jackie and their three children, Tracy Pezzente, Ginger Vano and Keith Buth; Darlene Huey, daughter, and her daughter Deanna Claas; Diane Dvorsky, daughter, and her husband George and their daughter Christine Dvorsky. Mr. Buth also has three great-grandchildren: Brianna Samonte, Kaitlyn Kneefel and Emma Buth. A viewing for Mr. Buth will be held on September 11, 2014 at Rice Mortuary at 5310 Torrance Boulevard, Torrance, California from 4:00 p.m. to 8:00 p.m. followed by a service the following day (September 12) at 11:00 a.m. Mr. Buth will be laid to rest at Pacific Crest Cemetery.