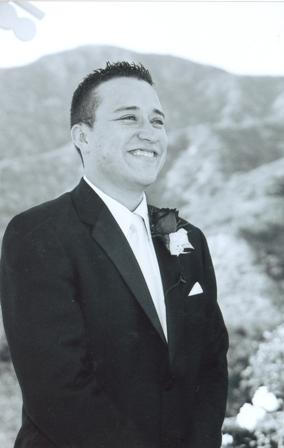 Julian A. Sutachan, 35, passed away on Monday, March 12, 2012 in Los Angeles. His final days were spent surrounded by his family and children. Born in Bogotá, Colombia, Julian was a loving father, husband, son, brother, and had a smile that brought happiness to anyone around him. He was devoted to his children, lived a life full of joy, and will be truly missed. With a B.S. in Computer Information Systems, Julian was dedicated to his career at the California Association of Realtors and considered it his second home and family. He had a passion to work hard and play harder and loved spending time boating with his entire family. Julian's life may seem short to many, but to those who were touched by his heart and personality understand that the quality of existence far exceeds the quantity of time in which we had with him. His smile and charismatic laugh will live forever in our hearts. Julian is survived by his wife, Sara Sutachan and children James Julian, and Juliette Sofia of Sylmar, CA; mother, Ruby Sutachan of Redondo Beach, CA; brother, John (Zaida) Sutachan of Lawndale, CA; brother, Jaime Sutachan of Redondo Beach, CA; grandmother Betty Pereira from Medellin, Colombia, and his father, Manuel Sutachan of Torrance, CA. A gathering of family and friends will be held at Rice Mortuary in Torrance on Tuesday March 20, 2012 from 5:00 p.m. to 9:00 p.m. with a Rosary at 7:00 p.m. A Funeral Mass will be held at Our Lady of Guadalupe Catholic Church in Hermosa Beach on Wednesday March 21 at 1:00 p.m. The inurnment will immediately follow at Pacific Crest Cemetery in Redondo Beach, followed by a reception. For family and friends attending the funeral services, a suggestion would be to wear Julian's favorite color of baby blue or blue (not black) clothing. In lieu of flowers, the family asks that donations be made to an Education Fund for his two children, James and Juliette. For details and instructions on how to contribute please click on the following link: ugift Note, any contributions will be split evenly among his two children. Thank you for your kind thoughts, prayers, and support during this difficult time.