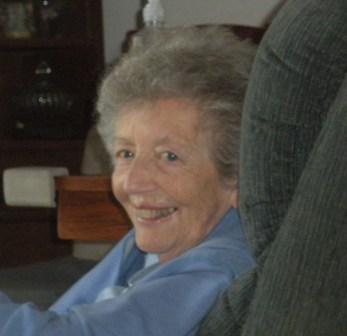 Julia Bruce, 95, passed away peacefully with all her family at her side Friday, February 23. She was an amazing woman; smart, capable, funny, creative and most of all loving. Born in Chicago March 30, 1917 to Irish immigrants David and Kitty Cox Mahoney, she attended Our Lady Help of Christians Church and School where she excelled. After her mother died in 1929, went to Mass & Communion daily and increased her devotion to the Blessed Virgin. In high school (Sienna H.S., Chicago) she was chosen class president in her junior and senior years. After high school, she went to work and took night classes at college. At Sears, Roebuck & Co, she met the handsome Milton Bruce and they married on October 28, 1939. Julie & Milt raised eight children, three girls and five boys. She joined the Blarney Club for mutual support from other Irish women also raising their families. Julie was a good writer as shown in the humorous diary she kept during the family's trek from Chicago to California in 1957. In California, while Milt carried on with Wine International, Julie kept all the kids moving along through various schools. Her leadership skills came to the fore when she was active in various groups: Nativity Mothers' Club, the "Greenhorns", St. Elizabeth's Guild, the local Archdiocesan Council of Catholic Women and St. Margaret Mary's Stephens' Ministry, where she visited people in need and offered compassionate support. Her spirituality centered on loving God and neighbor, with a special devotion to Mary, the Holy Spirit, daily Mass and the Rosary. She brightened any party with her lively spirit. In these last years, she maintained her optimistic spirit despite losing Milt after 62 years of marriage, losing most of her eyesight and much of her hearing. Yet she always had a sparkle in her eyes. Julia was predeceased by her husband Milt, her brother Jim, her sister-in-law & friend Elsie Broucek and her grandson Kevin Coward. Survivors include her eight children, Catherine, Mary, Bob, Tom, Daniel, Jim, Bill, Julie; ten grandchildren, Kelly, Karin, Daniel, Jen, Alison, Amy, Meghan, Gabriel, Andrew, Blas; seven great-grandchildren, Samantha, Alexandra, Eric, Sesi, Koa, Kendall, Blake; as well as numerous cousins, nieces, nephews & friends. Visitation will be held at Rice Mortuary (5310 Torrance Blvd, Torrance, CA) Wednesday, February 27, 5-9pm. A Mass of the Resurrection will be celebrated for Julia Thursday, February 28, 11:00am at Nativity Catholic Church (1447 Engracia, Torrance, CA). In lieu of flowers, memorial contributions may be made to the charity of your choice. The family thanks all who have helped Julia in these final years, with special thanks to her primary caregiver daughter Julie Schnorr; as well as daughter Mary Coward and son Tom Bruce. We will all remember her bright spirit.