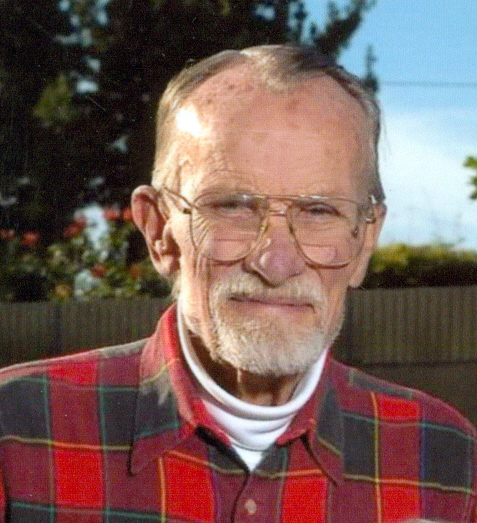 We celebrate the home-going of Judeen (Dean) Houge Holen. Jesus took him to be with Him on September 12, 2012. Judeen was born April 28, 1932 in Leyden, North Dakota (ND) to Joseph Albert and Myrtle Theresa (Blomquist) Holen of Leyden, ND. He was the first of four children. He was born and grew-up on the family farm in Leyden, ND, planting and harvesting wheat, barley, and oats, as well as, raising cattle and sheep. At Cavalier High School, he played football on both offense and defense, graduating in May 1950. Judeen attended North Dakota State College of Science in Wahpeton, ND, where he studied drafting. From 1952 to 1954, he served his country in the military as an infantryman, and, for a while, was stationed in Italy. He was the top marksman in his unit. He attended El Camino College in Torrance, California (CA), studying to become an engineer. Judeen married his high school sweetheart, Deloris Ann Spangelo on August 19, 1956 in Mountain, ND. They, then, moved to Hawthorne, CA and began their life together. Judeen worked for General Petroleum in Torrance, CA for a short period. After that, he worked for North American Aviation in Inglewood, CA, where he helped engineer and oversaw the building and testing of many of the fighter planes of the day. He continued aerospace engineering (including the 747) for Northrop in Hawthorne, CA, where he remained until his retirement in 1982. During that time, he transitioned effortlessly from the drafting table, with pencil and straight-edge, to CADM, the computer-based drafting application. Judeen loved the outdoors, whether it was working on cars, building or fixing something in the garage or going on the many family camping trips. He loved to tinker and figure out how things worked, and then, try to make them better. Judeen raised his family and served his Lord at Trinity Lutheran Church in Hawthorne, CA. He held many church leadership positions but loved developing and teaching Bible classes for junior highers through to adults. One of his greatest passions was bringing kids to Christ through the Bus Ministry. He was a Stephen's Minister and Leader. Up until his fall in March of this year, you could find him at his computer with his Bible open listening to the Lord as they developed a new study. He had a heart for those with addictions and faithfully led many 12-Step Recovery classes. We will always remember his love for the Lord and his desire for all to be saved. His wife, who he loved and cared for, has been at the throne of God praising Him and waiting for Judeen since January 19, 2012. Those of us waiting to join him will miss him greatly: children Terrilee (Chuck Schober), Luaine (Bryan Koenen), Bradley (Paula), and Jeffrey (Beth); grandchildren Chuck and Madelynn Schober; Donald (DJ) and Jessica Koenen; Ruth, Dorothy, Benjamin, and Joseph Holen; and Jeffrey (JJ) and Jessamyn Holen; brothers Daniel (Arlene) Holen and Harry (Florence) Holen, and sister Carol (Thomas) Eickoff; a host of loving relatives and many dear friends. The viewing and visitation will be at 12 noon with the Service of Celebration beginning at 1:00 pm on Friday, September 21, 2012 at Rice Mortuary 5310 Torrance Blvd, Torrance, CA. A reception will be held at the family home following the services. In lieu of flowers, the family would like you to consider donating to: Lutheran Social Services www.lsssc.org Long Beach/South Bay Area; World Vision www.worldvision.org ; Children's Hospital LA, Endocrinology/Diabetes www.chla.org.