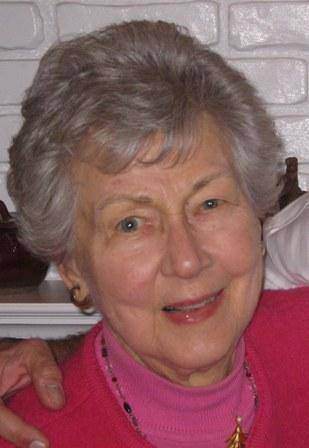 Joyce Schmeling Mouradian was born in Rockford, Illinois on January 9, 1925 of second generation German immigrants, William Schmeling, and Helene Kupsky, whose families emigrated from Germany in the mid-19th century, settling in Wisconsin. After high school, she trained as a hematology technologist, and worked for the U.S. Army during World War II, studying the blood of German prisoners, seeking out malaria contracted in Rommel's African campaign. She had also become interested in harp at an early age, and moved to New York in 1944 to study harp. She married Henry Mouradian in 1945, and had two children, William and Wendy, born in 1947 and 1950. She continued to play the harp while living in New York and had several civic involvements. She worked with her husband as a dental assistant. They moved to Ticonderoga in 1973, and soon after moving there Ticonderoga, she helped to organize the New Horizons Literary Club and the Champlain Valley Chorale. She was the New York State President of Christian Women United from 1984 -1987 and received their highest honor, the "Valiant Woman Award". She received May Walton (Floral) Designer of the Year award in 1999. She served as the State Garden Club District IV Awards Chairperson from 2001-2008. She received the "Law Day Award" from the Essex County Bar in 2004, the award she cherished the most. She was elected Carillon Garden Club President from 2006-2008. She served on the by-laws committee for the Troy Conference of the Methodist Church from 2006-2009. She received the State Garden Club President's Proud Pedestal Pin in 2008 for distinguished service. In 2011, she received the Award of Honor from the National Garden Club. At the Methodist Church in Ticonderoga, she served on the Staff Parish Relations Committee for 20 years, and was the Church Council Chairperson for 10 years. She was also on the Hospital Foundation and the Town Parks and Recreation Committee. She participated in medical missionary projects in Dominican Republic and Taiwan. She was truly an artist at heart, and enjoyed the Garden Club, her own garden, and her harp more than anything except her church, but she also enjoyed photography, and Silver Bay used her picture of their chapel for a Christmas card. She was brave, and took flying lessons at age 65, but her husband was too scared for her to continue. After 9/11, she wasn't afraid to board a plane that winter telling her son, "They will not make me afraid; that's what they want." When a grandson started skydiving, she said, "Oh I wish I could have done that." She cared for her husband by herself for years, and bravely lived alone at the Lake afterwards, with the help of neighbors Jimmy and Cathy Bolton. She was progressive. She was ecumenical, believed strongly in civil rights and was a woman's libber. In all of these things, she was ahead of her time. She was also tenacious. When she failed to recover from the effects of a serious car accident last year, she moved to California to be with her son and his family. She enjoyed herself in California, and liked to be driven along the beach, to be pushed around in the stores, and watch Wheel of Fortune and Jeopardy, but her balance and breathing continued to fail. She was never in pain and not afraid to the very end. She passed quietly at home, with family, on June 19, 2012. She is survived by two children, William and Wendy, seven grandchildren, Amanda, Lauren, Will, Samantha, James, Lily, and Christophe, and two great-grandchildren, Mikayla and Derek. Services will be held at Rice Chapel in Torrance CA on Saturday June 30 at 10am and at the First United Methodist Church in Ticonderoga, NY on Saturday July 21 at 11am. In lieu of flowers, donations may be made to the First United Methodist Church, 1045 Wicker Street, Ticonderga, NY 12883.