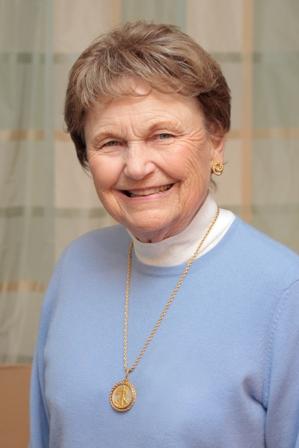 JOYCE A. TERRY Had the right name! She brought "joy" to all of us. Everyone who knew Joyce loved and respected her! She was born in Los Angeles on May 16, 1929, the daughter of Irvin and Marian Augustine. She died Wed., Feb. 29, after a 5 year battle with breast cancer. She grew up in the USC area and graduated from Manual Arts High where, as a senior, she met the soul-mate of her life, Carl, on a blind date. They married 2 ½ years later, in June 1949, and moved to Hermosa in 1951, South Bay residents ever since. While raising her children, Joyce graduated from CSULB and, in 1957, became a Kindergarten/1st grade teacher. When her 4th child was born deaf, she went back to college and became a Teacher of the Deaf, a career she continued until she retired in 1991. Joyce and Carl (also a teacher) adopted a deaf boy, Robert, in 1971. For 43 years, they traveled around North America by RV, visiting Canada and all the states. Their happy family made room for Chayo, age 15, whom they met on a trip to Mexico in 1975. In 1980, they became pilots and bought a 4-seat Cessna Cardinal. Together (as they always were!) they flew all over North America, landing in 49 states and the Provinces of Canada. In 1986, while in Hawaii, they flew a rental plane, to complete flying in all 50 states. During her 20 years of retirement, Joyce continued to travel by ship, plane, and RV, recently visiting Europe and Alaska. Since Carl was a WWII Submarine Sailor, they became very active in the Sub Vets group. Joyce has been Treasurer of the Wives Support Unit for about 15 years. For 35 years they have hosted a private party in Pasadena for the Rose Parade and a Pot-Luck lunch nearby; they had 80 guests this year. The world has lost a friend to all. Survivors mourning her are brother Jim Augustine, husband Carl, sons Dan (Sharon Z.) and Robert (Wendy), along with daughters Kathy Miller (Mike), Jill Smittle (Mark), Sharon Jean, and Chayo Pedregon (Eddie). Nine wonderful grandchildren, that Joyce loved dearly, are grieving for their very special Grandmother. The memorial celebration for Joyce will be on Saturday, March 10, 1:30 PM, at the South Bay Church of God, 17661 Yukon Ave., Torrance. Casual dress. I'll miss her forever, Carl.