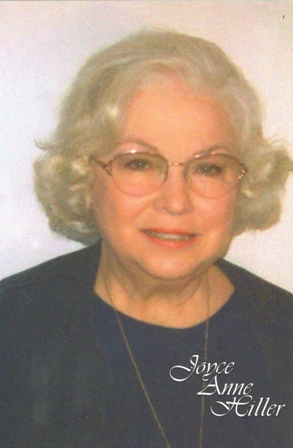 Joyce Anne Hiller, 72, passed into God's care Wednesday, Nov. 7, 2012, at her home in Redondo Beach, CA. Born Dec. 14, 1939, in Brooklyn, New York, she spent her childhood in Allegany, NY, moving with her family to El Segundo, CA in 1954. She graduated from El Segundo High in 1957, from El Camino College in 1959 and majored in Graphic Design at UCLA. She obtained her Cosmetology license in the 1970's and owned 2 Merle Norman Cosmetic studios, one in Beverly Hills and one in Santa Monica. In the '80's she opened her own facial salon, "New Image", and was the West Coast Beauty Editor for Redbook magazine. She was the make-up artist for several TV shows, including "The Jeffersons." She owned another Merle Norman studio in the 1990's, in Hawthorne, CA. After retiring, Joyce served as a volunteer tutor of adult literacy at the El Segundo Library, and also tutored children in basic skills. Joyce loved traveling, being a cosmetologist, catching up with old friends, and anything dealing with British History and Literature. She was a member of the Richard III Society for many years. Joyce is survived by her sister and brother-in-law, Lois and Donald (Norm) Hagen of Watsonville, CA; 3 nephews and their spouses: Roger and Kate Hagen, Lilburn, GA; Paul and Tracy Hagen, Fort Mill, SC; and Gary Hagen and Michelle Welk, Burbank. She also leaves a grand-niece and grand-nephew, a great grand nephew, 3 aunts, her devoted friend Larry Sellstrom, and numerous cousins and close friends. She was preceded in death by her parents, Bill and Ellie Hiller, and her infant brother Richard. A memorial will be held on Thursday, Dec.6, 1:00 p.m. at Visitation Parish Center, 6561 W. 88th St., Westchester. Her cremation and arrangements were by Rice Mortuary, Torrance, CA. She will be interred in the Spring in Visalia Public Cemetery. In lieu of flowers, her family suggests contributions either toward the cost of Joyce's final interment, sent to Lois Hagen, 525 Cedar Dr., Watsonville, CA 95076; or to City of Hope, 1055 Wilshire Blvd., LA, CA 90017, Attn: Joe Komsky. Please include a note to City of Hope stating: "This contribution is directed to GI Cancer Program in memory of Joyce Hiller."