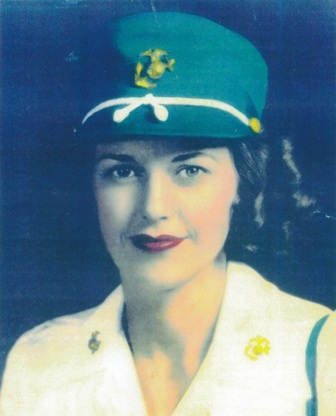 Josephine Marie Law passed away quietly in her sleep at home on June 8, 2015. She was born October 6, 1917 to Michael Hugh Byrnes Jr. and Mary Gallagher Byrnes, the oldest of five children. She enlisted in the United States Marine Corps Women's Reserve (MCWR) in 1944. Following boot camp at Camp Lejeune, North Carolina and Aircraft Mechanic School at the Naval Aviation Technical Training Center, Norman, Oklahoma, she was assigned to MCAS El Toro in Orange County, California. She served as an Aircraft Mechanic and Chief Clerk of the Engineering Division for her tour of duty. When she was Honorably Discharged in 1946 she moved to Hermosa Beach, CA and took a job with Western Airlines as a secretary where she met her future husband, Pete Casey Law. They were married in 1947 and moved to Manhattan Beach, Ca where they had three children. Following her employment with Western Airlines, Jo Marie worked briefly for the Torrance Chamber of Commerce while raising her family. In 1971, she was employed as the Minute Secretary to the Mayor and City Council of Redondo Beach until her retirement in 1982. She was a founder member of St. Lawrence Martyr Catholic Church and a current member of American Martyrs Catholic Church. Jo Marie was preceded in death by her husband Pete, son Felix and siblings, brother Frances Byrnes and sisters Helen Doyle and Elizabeth (Betty) Loftus. She is survived by her son Casey (Sharon) Law; daughter Maggie Law; grandchildren, Kelsie Daubenschmidt-Bixler, Jeffrey Ethan Bernard (J.E.B.) Law, Anne Marie (Annie) Law; great grandchildren Mary Daubenschmidt and Ryan Daubenschmidt and sister, Doris Byrnes. Viewing will be Friday, June 12, 5-7:30 pm at White and Day Mortuary, 901 Torrance Blvd, Torrance Ca. followed by a Rosary at 7:30 pm. The Funeral Mass will be Saturday June 13, 10:00 am at American Martyrs Catholic Church 624 15th Street, Manhattan Beach, CA with a reception immediately following in the Church Hall. Interment Burial will be at the Riverside National Cemetery.