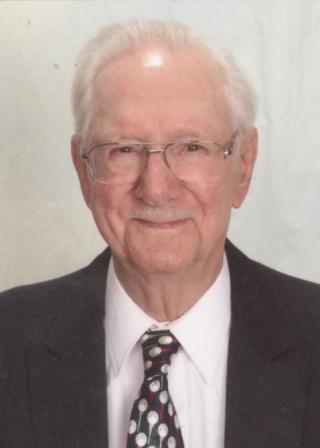 Joseph Roy Helfrich, April 18, 1919 - June 28, 2013, resided in Torrance, CA. Joseph R. Helfrich - 94, passed away peacefully in his home on the evening of June 28, 2013, after having his three children and step-daughter spend time with him earlier in the day. Born in 1919 in St. Anthony, North Dakota as the fifth of seven children to Johannes and Magdalena Helfrich, Joseph grew up on the family farm in St. Anthony. He attended school through 6th grade and then worked full-time on the farm attending 7th/8th grade school as time and chores allowed. Joseph met Leocadia Bernhardt (known to everyone as Katie) from nearby Mandan, North Dakota and they married in 1940. Shortly thereafter Joseph enlisted in the Army Air Corp where he served as an airplane engine mechanic during World War II. During the war, Katie followed Joseph to several duty stations including Sheboygan, Wisconsin, and San Diego, California. During the war, Joseph served in the Philippine Islands where his airbase was repeatedly bombed. Although he was enlisted in the Army Air Corp, Joseph had a particular dislike for flying and therefore he traveled to and from the Philippine Islands aboard Navy ships. After receiving an honorable discharge, Joseph and Katie ultimately settled in Torrance, California where their first son, Rickie, was born in 1957. Shortly thereafter, Joseph packed up the family and moved to Denver, Colorado and opened a local butcher shop with his brother Frank. In 1960, Thomas was born and Diane in 1962. By the mid-1960's, supermarkets were displacing many of the local mom and pop stores and Helfrich Meat & Produce quit business in 1966. The family returned to Torrance, California where Joseph found work on the assembly line at Douglas Aircraft. Within two years, the family had moved to Hawthorne, CA and Joseph joined the Hermosa Beach City School District as a maintenance man. Both Rick and Tom were also able to work with Joseph at the school district during summers in high school. Joseph retired from the school district in 1982. Throughout his life, Joseph had a great talent and love for music. Starting back in North Dakota, he and his brothers and sister would play weddings and parties with Joseph on accordion. He was equally at home musically on the piano/keyboard, drums, and guitar and had an ear that could pick up any song in just a few moments. After the passing of Katie in 1992, Joseph met Barbara Allen of Torrance, CA with whom he shared a love of music and dancing. Joseph moved into Barbara's home in 2005 and was able to remain in their home after her passing in 2012. While they were never formally married, Joseph and Barbara were fiancés and the Helfrich and Allen families became one. Joseph is survived by his sister, Susie Kuntz of Arvada, Colorado; children Rickie Joseph Helfrich of San Pedro, CA; Thomas Max Helfrich-Stone of South Pasadena, CA; Diane Barbara Helfrich-Rapp of Lawndale, CA; and his step-daughter Denise Nettleton Jacobs of Rolling Hills, CA. Interment will be at Pacific Crest Cemetery in Redondo Beach, CA. A Celebration of Joseph's life will be held on July 10th at the Allen home in Torrance, CA. Please contact Thomas Helfrich-Stone for info at tomhstone@att.net.