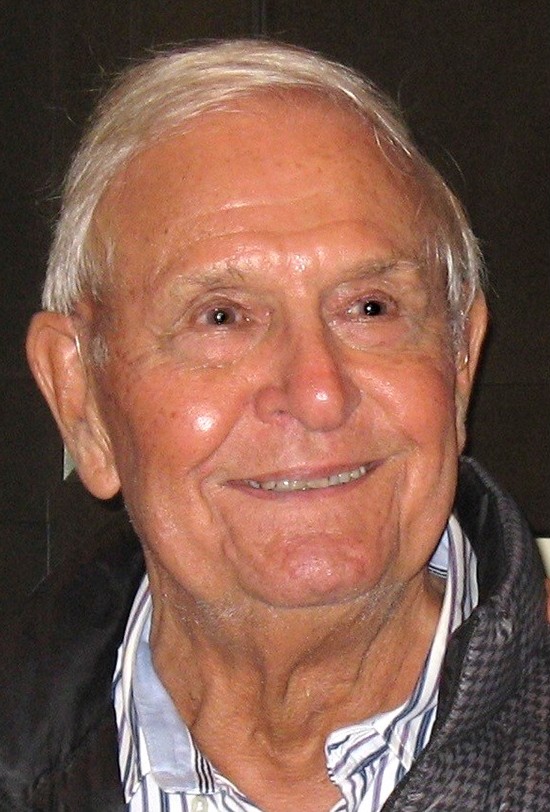 Joe Fontana, of Redondo Beach,  was born in 1924 in Hamden, Connecticut to William Fontana and Ancella Variani Fontana. He attended Lewis High School in Southington, CT, along with his brothers Willie and Jack and many Fontana cousins. He also attended St Thomas Church in Southington throughout his childhood.

Growing up during the depression he worked many jobs to help out his family. He delivered special delivery mail, the Saturday Evening Post and he worked on a farm during the summers and after school. From an early age he was very interested in cars and purchased an old car that didn’t run when he was 17, and together with his brother Willie got it working. They called her Leapin’ Lena, starting his lifelong habit of creating fun nicknames for people.

He attended Glendale Aeronautical Institute in Glendale, CA, studying to be an aeronautical engineer. In 1943 he enlisted in the navy. He attended Naval training in San Diego, CA and officer candidate school at Yale University. He served as an electrical and radio man on an aircraft carrier in the Atlantic, and then remained in the reserves until 1948.

On the GI Bill, he attended Columbia University in New York, earning an electrical engineering degree in 1948. He belonged to the Theta Tau Fraternity and learned many songs, many “off-color”, that he sang throughout his life. He loved his time at Columbia and in New York City.

Following graduation, a friend recommended him to Manning, Maxwell and Moore in Danbury, CT, where he was hired. Once he returned to CT, he got hooked on stock car racing and raced cars at many of the circular tracks throughout Connecticut. He attended reunions on the east coast up until the year prior to his death.  In 1950 he met Pauline Zuhusky from Springfield, MA and they married in 1952. Daughter Mary Anne was born in 1954 followed by Christine in 1956.

In 1957, Joe and Pauline moved to California to open a division of Manning, Maxwell and Moore, (later called Consolidated Controls Corporation), to supply the fast-growing aerospace industry. They settled in Redondo Beach, next door to lifelong friends Gene and Grace Knight and their kids. In 1958 their youngest daughter Elizabeth was born. Joe loved and excelled at both fatherhood and his job. He grew the company to the point of 500 plus employees. They supplied parts for airline builders and for spacecraft in the NASA programs during the time of the race to the moon. They also supplied ignition switches to the space shuttles. He loved his work and the group of people he worked with at CCC became life-long friends.

He taught his daughters to ski and with his wife, raised his daughters catholic, and sent all 3 of them to USC. They took ski trips, vacations and just had a fun time all the time. A yearly highlight was an annual family reunion with all the family in Lake Tahoe. Joe loved that time with his family, especially with all his hilarious antics rafting on the Truckee River.

He very recently said “I love speed. I’m a racer.” And indeed, he was! He kept his interest in racing, building engines for race cars that raced at the Bonneville Salt Flats in Utah, and the achievement he was most proud of was setting a record in a gas-powered engine that he built at the age of 82. He went 255 miles per hour! He retired from CCC in 1986 and opened Fontana Automotive where his team built racing engines for midgets and sprint cars. He sold his engines throughout the US and in Australia, and he and his wife had a blast traveling the U.S. and over to Australia and New Zealand attending races and making friends. His knowledge was vast, and he was well-known in the racing circuits, with people approaching him all the time to ask his guidance for their engines and their cars. He always pegged what was going wrong and helped them to fix or adjust for better performance. In fact, even during this last year of his life he still had people calling and asking him how to source a part or solve a problem.

His love of racing also lead him to participate and organize the Ivy League Ensenada Sailboat Regatta, which was a group of Ivy League schools that raced sailboats in the annual Newport Beach to Ensenada yacht race. Boats he skippered won many times. He was particularly proud of winning the race in 1995, beating Dennis Connor and his team (America’s Cup Champion).

His wife Pauline passed away in 2004 when Joe was 79 which was a big blow after being married for almost 52 years. Joe sold Fontana automotive when he was 86, and then devoted his time to traveling, gardening, and restoring a 1953 GMC truck, and attending races. Over the years following, three of his grandsons from Illinois lived with him which he enjoyed so much!

He is a  member of the hall of fame of many auto racing associations, and the one he is most proud of is being a Hall of Famer for NEAR (New England Automobile Racers) which honored him for his contributions to the sport in the 1950’s. He is also a member of the 200 mph club of the Bonneville time trials, another accomplishment when you consider he did this at 82!

He is remembered as a kind, generous, intelligent man, with a quick wit, joie di vivre and had the ability to make everyone feel comfortable and like an instant friend. He never let setbacks get him down. He provided guidance throughout life to his daughters and then to his grandchildren, Katie and CJ and Larry, Matt, Joey and Will. He was a faithful man and loved his country. He will be missed by all who had the pleasure and honor to know and love him. He is survived by his daughters, Mary Anne (Christopher Warmuth), Christine, Elizabeth (Larry Hall), as well as all his grandchildren. WE LOVE YOU DAD, GRANDPA, JOE!!!