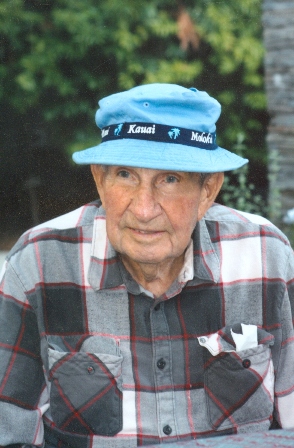 John Matthew Webster Surrounded by his loving family, John Matthew Webster passed away on Saturday, March 31, 2012. Born in Burley, Idaho, October 16, 1918 he grew up in Sandy, Utah. John was a 68 year resident of Redondo Beach when he passed away at the age of 93. John worked in the floor covering industry until he finally retired at the age of 84. He was known for his special BBQ'd ribs which he lovingly cooked at all the many family gatherings. He also enjoyed growing tomatoes in his backyard. He was the happiest surrounded by his family and friends. John was a loving husband, father, grandfather of 13 and great-grandfather of 16. John is survived by daughter, Sandra Caminiti of Rancho Santa Margarita, CA; son Bruce (Lisa) Webster of Santa Maria, CA; daughter, Diane (Neil) Campbell of Irvine, CA; daughter Nancy (Bob) McCandless of Torrance, CA; and son, Bob (Annie) Webster of Long Beach, CA. He was preceded in death by his wife, Geraldine Webster. A gathering of family and friends will be held at White and Day Colonial Mortuary, 901 Torrance Blvd., Redondo Beach, CA 90277 on Friday April 6 from 4:00 pm until 8:00 pm. The funeral will be held in the same location on Saturday April 7 at 12 noon. Burial will be at Green Hills Memorial Park in Rancho Palos Verdes.