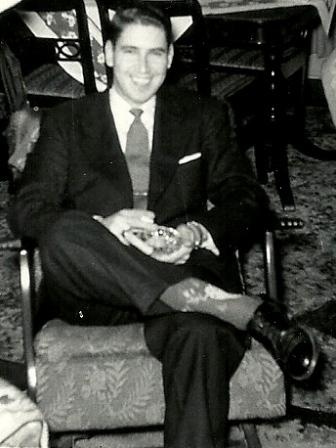 John W. "Jack" Menard Jack Menard passed away at the age of 86 on July 5, 2013 while living at Huntington Retirement Home in Torrance, California. Jack was born on April 22, 1927 to Alphonse T. and Anna C. (Anderson) Menard in Marquette, Michigan. He served his country in the U.S. Navy from April, 1945 to November, 1954 as a Pharmacist Mate and was awarded the Victory Medal and the American Area Campaign Medal. While still in the service, Jack attended Spencerian College in Kentucky and received his Bachelors degree in 1950. During the college years he was a member of the Pi Rho Zeta Fraternity along with his cousin, Clark Leffler. Jack received a Graduate degree in Banking from the University of Wisconsin in August, 1974. He chose a career with First Wisconsin Bank (now US Bank) where he worked for 28 years. He travelled frequently on bank business and maintained a residence in Milwaukee, but his heart resided at Windridge Farm near Montello, Wisconsin. There he vacationed before and lived after his retirement. Jack was a very social, fun-loving and active person who maintained Open House at The Farm. He was also an avid outdoorsman who loved water skiing, golf and hunting. Jack's family and many friends remember him as a fervent Catholic, a smart, kind and generous person—and they remember good times with him at The Farm with great fondness. During his early retirement, Jack spent his summers with his sister, Elizabeth "Betty," in Southern California. In later years he lived year round in Southern California. He was the last of his siblings and was preceded in death by his older brother, Ken Menard and his sisters (identical twins) Elizabeth D. "Betty" (Menard) Nyquist and Jean (Menard) Mann. Jack is survived by his nieces and nephews: Beverly (Nyquist) deGero, Marc Nyquist, Catherine (Nyquist) Diaz and Toni (Nyquist) Blakeman—Betty's children; by Fred Mann, Joan (Mann) Pennington and Bill Mann—Jean's children and by Kurt Menard—Ken's son. There will be a Memorial Service on Saturday, November 30th at 2PM followed by a reception at Rice Mortuary in Torrance, California.