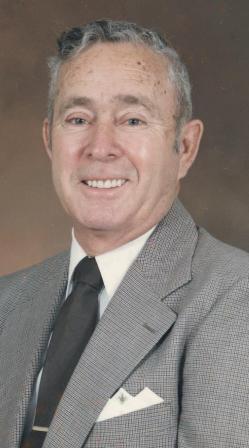 John Leslie Stevens John Leslie "Les" Stevens, age 93, was peacefully called home by his Heavenly Father on Thursday, January 9th 2014. He joins his beloved wife, Christella "Chris", in eternal Life. He was born July 30, 1920 in Cash Arkansas to James Henry Stevens and Ethel Mae Powell. He was the oldest of 6 siblings. He met his future wife of 70 years, Chris, at a baseball game in Cash Arkansas. Les was with his best friend Rufus McDaniel, and Chris was with her best friend Imogene. The four life-long friends were married on May 24, 1942, in a joint ceremony. Les enlisted and served honorably in the US Navy during WWII where he was a Pharmacist Mate, First Class aboard SLCU 18. He remained friends with his shipmates and attended numerous reunions with his Navy buddies and their families. He and Chris moved to California in 1956, living in Redondo Beach, Manhattan Beach and for the past 37 years, in Torrance. Les earned his B.S. degree from Arkansas State in 1948, and furthered his studies at Washington University in Missouri, Harris Teacher's College, University of Southern California and Long Beach State, focusing his studies on biology, chemistry, psychology and education. He then taught biology at Mira Costa High School in Manhattan Beach for 28 years. He loved to read and study the Bible. He was a long time member of the Church of Christ, most recently a member of the Redondo Beach Church of Christ. It was important for him to spread the word of the Lord. He also enjoyed reading about health and nutrition, finance and politics. And he loved sports, especially baseball. His favorite team was the St. Louis Cardinals, followed closely by the Los Angeles Dodgers. He also loved to watch USC football and collegiate armed forces football. Les and Chris loved to travel and the family spent many summer vacations visiting each contiguous US state, Canada and Mexico. Later he and Chris visited Hawaii. He is survived by three children, Judy Lynn Hudson of Abilene, Texas; Cathy Ann Sivoli of Torrance, California and Lance Scott Stevens of Riverside, California. He is also survived by 8 grandchildren and 4 great-grandchildren. He loved much and was much loved, and above all, he loved the Lord. The Service will be held at 4pm, followed by a visitation until 8pm, on Friday, January 17, 2014 at Rice Mortuary, 5310 Torrance Blvd, CA. (310) 792-7599.