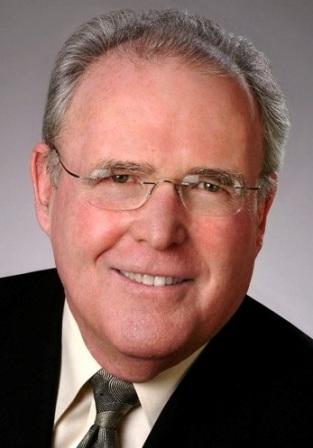 John J. Duffy 5/19/1939 - 1/23/2013 Born in The Bronx, New York, the son of Felix and Nora Duffy and the loving husband of Eileen (Heron), John has found his eternal rest after a long struggle with melanoma. In love with his life and his work, he was until recently still to be found at his office at DLA Piper LLP (US) where he specialized in commercial real estate leasing. Previous to DLA Piper, he was a partner at Pillsbury Madison & Sutro. He is survived by his stepson, Morgan Alexander of Casa Grande, AZ; his brothers Edward (Barbara) of Wauwatosa, WI and Patrick (Brigid) of Peekskill, NY; and his nephews and nieces: Lt.Col. Kevin Duffy, USMC of Carlsbad, CA, Jack of Somers, NY, Patrick of Mt. Kisco. NY, Joshua of West Allis, WI, Benjamin of Minneapolis, MN, Deirdre Benedict of San Leandro, CA, and Katherine and Nora of Wauwatosa, WI. Immediately after receiving his law degree from N.Y.U., John moved to Los Angeles and began his forty-year career as an attorney. Previously, he had earned a Bachelor's from St. Joseph's in Yonkers, NY, and a Licentiate in Sacred Theology from the Pontifical Gregorian University in Rome, and from there he returned to the Bronx and earned a Master's at Manhattan College. John's colleagues at DLA Piper expressed their sorrow at his passing with a heart-felt appreciation which read in part, "John earned a reputation of being one of the finest real estate lawyers in California. His strong intellect and passion for the law was tempered by the street smarts and instincts he gained growing up in the Bronx. As the son of an Irish bar and restaurant owner, he had a wonderful insight into the nature of people. Those who knew John could only smile thinking of him, as a young man, selling beer at Yankee Stadium. Living in the Bronx may also account for his great love of Hawaii, being in the sun and on the beach instead of the snow and slush of New York. Few lawyers in California could match John Duffy's skills as a lawyer; all would agree that there was no better person than John. He did not swear, was a devoted husband to Eileen (as John said, "the love of my life"), and could protect his clients without raising his voice, relying instead on logic and appealing to the other side's sense of fairness. Each time a deal was concluded, John's client, the other side's lawyer, and the other side had very positive feelings toward John as he established a framework for the transaction to proceed on a win-win basis. Those of us who had the privilege of working with John cannot recall him ever speaking negatively of others. He was also a wonderful mentor of young lawyers, instilling intellectual and ethical rigor through his own dedication to the law. Simply put, John was an elegant and decent human being with a generous spirit who was, and will remain, cherished by his clients and adored by his partners and co-workers. He, and the twinkle in his eye, will be missed by all." A scrappy guard on the basketball court, a genial bon vivant and a disciplined runner of a New York City Marathon, John became an avid Lakers fan but in baseball never lost his love for the Yankees and found his West Coast Rockaway in Manhattan Beach. Viewing from 12PM to 4PM, with a Memorial Service dedicated for the final hour, will be held at the White & Day Mortuary, 3215 Sepulveda Boulevard, Manhattan Beach, CA., on Saturday, Jan. 26, 2013. A New York Memorial Service will be held at a later date. In lieu of flowers, please send donations to Sacred Heart School, 1248 Nelson Avenue, Bronx, NY 10452 or the John Wayne Cancer Institute, 2200 Santa Monica Boulevard, Santa Monica, CA. 90404.