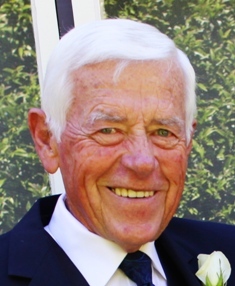 John James McBride, a life-long resident of the South Bay, passed away August 12, 2014, surrounded by his loving family. John was born November 7, 1934 at Old Torrance Hospital to Muriel (Dickson) McBride and Carl McBride. John grew up in Redondo Beach, attending Beryl School and Central School. He was a proud RUHS Seahawk, graduating in 1952. He attended El Camino College and Long Beach State. After serving two years in the Army, John joined the Redondo Beach Fire Department as a Hoseman on June 16, 1960. He worked his way up the ranks, becoming a Fire Prevention Inspector in 1963 and a Fire Engineer in 1965. John was promoted to Fire Captain in 1970. While Captain, he attended the L.A. County Paramedic Training Institute and was certified in 1972. From 1972 to 1977 he served as the department's first Paramedic Coordinator. In 1974, John was recognized with the Valor Award from the California State Fireman's Association for rescuing a person who was drowning off the Redondo Beach Pier. John was promoted to Battalion Chief in 1982, a position he held until his retirement in 1992. During his career in the fire service, John served as President of both the Redondo Beach Firefighters Association and the Harbor District Fireman's Association. He also served on the Public Relations Committee for the California State Fireman's Association. John was an avid horseman. He was an active member of the Empty Saddle Club in Rolling Hills Estates and served as President in 1993. He was a long-time member of The Santa Barbara Trail Riders and The Los Caballeros where he served as President in 1999 and 2000. He rode with the Desert Caballeros in the California Camp and was also a member of the Vaqueros Del Desierto. John was a member of The Palos Verdes Peninsula Horseman's Association and The Catalina Island Conservancy. He worked with the Palos Verdes Peninsula Land Conservancy and Para Los Ninos to introduce children to horses for the first time. John was a true gentleman with an infectious smile that lit up the room. He was a wonderful husband, father, Papa and brother who loved spending time with his family. Both he and his wife Ann were avid gardeners and planted bountiful flower and vegetable gardens every year. He and Ann also traveled extensively, visiting places like Brazil, Alaska and Tahiti. Some of their favorite trips were weekend getaways to visit their daughter in San Diego. John also loved to fish and took many trips with his two sons, both deep sea and lake fishing. He and Ann treasured the time they spent with their grandkids, taking them to museums and on trips to Catalina, Hawaii and Utah. John will be dearly missed by his beloved wife Ann, sons David (Elizabeth) McBride and Jeff (Diane) McBride, daughter Jennifer (Michael) Lamar and six grandchildren, Justin, Hailey, Matthew, Sarah, Dean and John; His sisters Virginia (McBride) Diaz and Joan (McBride) Stuart, brother-in-law Henry Stuart and several nieces, nephews and cousins. A Celebration of Life will be held at the Empty Saddle Club on September 13th at 12 noon. Donations can be made in John's memory to The City of Hope.