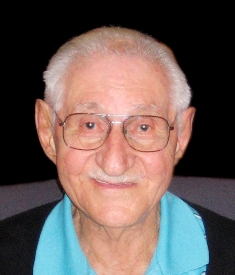 John Christopher 1921-2013 "We were all blessed to have had you in our lives and for the love you showed and gave us." John Christopher passed away on Tuesday January 1, 2013 at the Huntington Residence in Torrance. Born in Edmonton Alberta, Canada, John was 92 when he died and a member of St. Katherine's Greek Orthodox Church and the Order of Ahepa. John grew up in Edmonton before he joined the Royal Canadian Air Force as a flight engineer during WW II. He opened Chris' diner and then went into business with his brother Harry to sell and repair appliances. In 1962 John and his family relocated to the Torrance area. He loved working with his hands in his wood working shop and tending his garden. He was passionate about his Greek heritage and served as District President and in various positions with the Order of Ahepa.John is survived by his daughters Niki Christopher of Torrance, JoAnn Parmenter of Poway and her husband Mark and their children John and Michael and Stephanie Haire of Pleasanton and her husband Denis and their children Alexis and Austin. He was a hardworking and loving father and grandfather. Funeral services will be held at St. Katherine's Greek Orthodox Church on Saturday January 5 at 1:00 pm. Burial will be in Canada. In lieu of flowers, donations may be made to St. Katherine's Greek Orthodox Church, 722 Knob Hill Avenue, Redondo Beach, CA 90277.