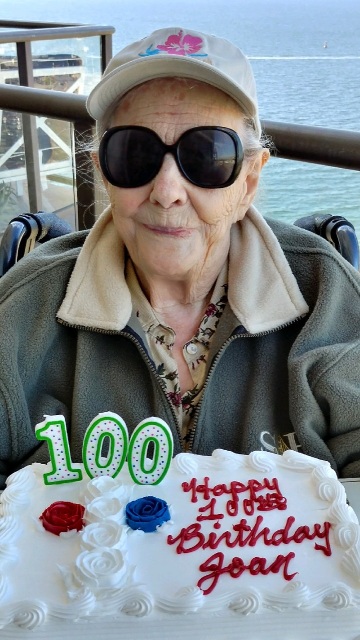 In the early morning of September 5th, Joan Jane Jones passed away peacefully in her home at the milestone age of 100. Lovingly known as “Ocean Gramma” for her 40-year seaside residence in Redondo Beach, Joan is survived and joyfully remembered by her son, David, daughter-in-law, Inta, four grandchildren, Kristin, Katie, Alissa, and Andrew, and four great-grandchildren, Heidi, William, Kenny, and Eva. Joan was born Joan Jane Hollman to John and Wilhelmina Hollman in Los Angeles in 1917. She lived in Southern California for her whole life and was a true California girl, but in her prime she also travelled the world. Her grandchildren remember her home as a treasure trove of exotic items that she brought back from her travels. Joan married David W. Jones in 1942, and they had two sons, David Jr. and Forrest, who were her ultimate pride and joy. Education was of highest importance for her sons, grandchildren, and herself. She was a careful reader who paid special attention to religious significance in texts, and her cards of encouragement and congratulations to her family were an exercise in the bygone art of handwritten letters. In her later years, Joan enjoyed going out to lunch and taking walks on the beach with her loving caretakers, Jeanie and Anna, and visiting with neighbors and family. Joan is predeceased by her husband, David, son, Forrest, and grandson, Bradley. We hope they are dancing together in Heaven. We love you, Ocean Gramma!