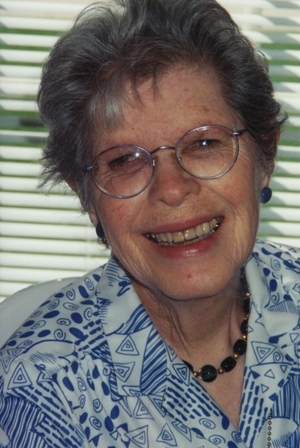 Joan E Price died peacefully Sunday October 4, 2015 surrounded by four of her eight children at Cedars-Sinai Hospital in Los Angeles at the grand age of 90. Joan was born Dec 10, 1924 in Los Angeles, the first of four children of Fred M. and Margaret E. MacLean. She grew up in the Glendale/Burbank area of So. California. She worked as an aircraft draftsperson before attending U.C. Berkeley to study Meteorology. During this time she met and married a sailor, Edward C. Price, on June 22, 1945, in Glendale. They were stationed in Bremerton, Washington in Navy housing before she returned to Glendale to have her first child Stephen. After a short stay in Glendale, they moved into the married students housing at UCLA while Edward studied mechanical engineering under the GI bill. While there she nursed her husband through a bout of polio while also working in the UCLA library and caring for, now, three small children. In 1952, after graduation, they settled in Torrance, where Ed worked in aerospace for Garrett AirResearch for 33 years. Their family continued to expand to six sons and two daughters. They loved family, church and serving the community. Joan supported her husband, Ed, in everything and was very active at his side. Together they enjoyed camping, reading, museums, navel ship open houses, square dancing, and bible study. They enjoyed 62 years of marriage until Edward's passing in 2008. Joan is survived by her brother Greg, eight loving children and their spouses: Stephen & Gerong (deceased) Price, Margaret & Roger Carmody, Catherine & Steven Larson, Michael & Jacqueline Price, David & Susan Price, Vincent & Annette Price, John & Vivienne Price, Timothy, 12 grandchildren and 3 great grandchildren. Visitation 5:00 to 9:00 PM Wedneday, October 14, with a Recitation of the Rosary at 7:00 PM, Rice Mortuary, 5310 Torrance Blvd., Funeral Mass 10:30 Thurssday, October 15, St. Catherine Laboure Catholic Church, with interment in Holy Cross Cemetery, Culver City.