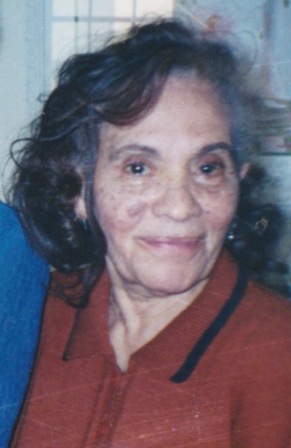 Jerlena Anderson Duke was the 2nd daughter born to Jess Anderson and Clara Tatum Davis on November 8, 1919 in Paris, Texas. Her parents were very young and separated when Jerlena was 2 months old. Her mother lived with three siblings who helped raise her two girls. When Jerlena,(nickname Jerry) was 5 or 6 years old, her mother married Joel Polk who became a beloved step-father and was affectionately called Poppa. He saw to it that the girls and their mother attended school. Education became important to Jerry. She loved going to school. She also loved going to church and became a young member of Hospitality Church of God and Christ. Because there were 5 more children added to the family, Jerry went to stay with an aunt, then with her biological father and one of his two sons in Oklahoma. There, she attended Frederick Douglas High School, but returned to Paris and graduated from Gibbons High School. After graduation, she worked various odd jobs. During World War II, she worked at the local armed forces USO club. Just before the war ended, she moved to Los Angeles with her sister Myrtle and husband Allen Harris. They lived in a duplex on “the Westside” of LA. While working in a drug store in town, she was introduced to William Edward Duke by a friend and coworker. Jerry and William dated for 6 months and were married March 24, 1946. They purchased a house. Two daughters grew up in that house... Anice (Nici) and Daphne. Jerry was now a housewife and mother and a very happy talented one. She especially enjoyed gardening and sewing; making clothes for herself and her daughters, pleated drapes, and bedspreads for her home. When Anice started school, Jerry joined the George Washington Carver Elementary School PTA and continued until Daphne graduated. During her entire membership, she either held an office or was an intricate member of a committee or both and volunteered for everything. She baked, worked booths at the school carnival, and helped make costumes for the school plays. She became the assistant scout leader, and then, leader of Brownie Troop #363. To this day, she is fondly remembered and truly admired by the girls who passed through her troop. In addition, to all these activities, she “worked” the polls for all elections, & assisted the U.S. Post office every holiday season. After her girls finished school, Jerry returned to Carver and became a noon aide, watching over the children during lunchtime. She moved to other schools throughout the Willowbrook/Compton district, eventually becoming a teacher’s aide in the classroom, then retiring in 1986. Besides the activities surrounding school, there were her church activities. She became a member of Grace Memorial Church of God and Christ, joined the choir, taught Sunday school and was in charge of children’s programming for holidays and 4th Sundays. Later, she was to become a member of Southside Christian Palace, continuing with active work in Sunday school, choir and during services, a span of approximately 35 years. Jerry and William spent their retirement years renewing old friendships, attending anniversary parties, every family event and caring for grandchildren. When William made his transition in 1995, Jerry continued to participate as much as possible. Jerry’s love for family, children, church and school never ended. At the age of 87, she was still driving herself to the grocery store, bank, church, doctor, and local family events. She continued to care for her grandchildren, garden, and be an avid reader. Jerlena Anderson Duke departed this life September 1, 2017 after a longtime descent into dementia. All of her 9 siblings preceded her in death. She leaves behind daughters Anice Mason and Daphne Hester. Son-in-laws Charles Mason Sr. and Carl Hester. Her grandchildren Shawnee Muhammad, Charles Weaver, Charles Mason Jr., Camille Simmons and grandson-in-law Joseph Simmons. Great-grandchildren William Weaver, Sa’eedah Ali, Miles Mason and Yemaya Mason. Sisters-in-law Irene White, Constance Duke-Allston, Harleyetta Duke, Julie Polk, and Una Polk. Special care-giver Hasim Brown. And many, many nephews, nieces, cousins and other relatives.