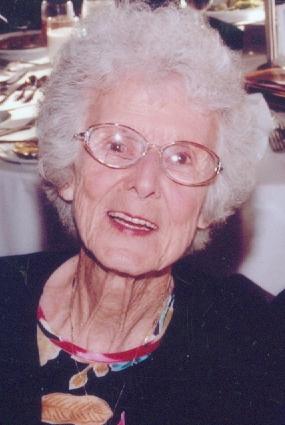 Jeanette Rice August 19th, 1923 - December 19th, 2012 Jeanette Rice, or "Mimi," as she was affectionately known to her extended family, joined her beloved husband Jack Rice in heaven on December 19th, 2012. She died peacefully at her home per her wishes. Jeanette was born in Titusville, Florida August 19th, 1923. At the age of five, her mother died and she was brought to California by her older sister, Aunt "Weaser" who raised her in Ontario, California. Jeanette married the love of her life John Joseph Rice "Jack," on January 22nd, 1943 in San Diego. Jeanette and Jack first met while living in a two-story San Diego boarding house where Jack wooed her with his singing voice. They were married for sixty-five years before Jack passed away on December 21, 2007. Jeanette and Jack lived in San Diego, Wilmington, and San Pedro before moving to Torrance to stay, in 1954. Jeanette was the homemaker, raising four children in the Torrance house where she lived for fifty-eight years. Jeanette loved to entertain with Jack and especially liked to mingle with her guests making them feel welcome and comfortable. Jeanette was a parishioner at Saint Lawrence Martyr church for fifty-seven years. During her lifetime she volunteered her time to schools, charity thrift shops, and hospitals such as Little Company of Mary as well as Torrance Memorial Medical Center Auxiliary where she served a term as president. She worked as a volunteer at the South Bay Auxiliary Hospital Thrift Shop in Redondo Beach until shortly before her death. Jeanette enjoyed an active life, she and Jack did aerobics and played golf. Jeanette especially liked to play three par golf courses such as El Segundo Lakes and Alondra; winning awards in golf tournaments. Jeanette enjoyed her morning walks, loved to read detective stories, liked to travel and was a member of a bridge group for over fifty years. She had her favorite eateries that she visited at least once a week including Snacks, Hanks Italian, and the Elephant Bar Restaurant where she was warmly greeted like family by the staff. Jeanette was generous, loving, caring, kind and compassionate and will be missed by all. The family is deeply grateful to Tim Rice, her oldest son, who unselfishly gave of himself watching over Mimi. Mimi is survived by daughter Jill McDermott (John) of Simi Valley CA; son Tim Rice of Torrance; son Peter Rice (Joyce Dallal) of Culver City CA; daughter Sally Rice of San Clemente CA; Grandchildren Diane, Donna, Denae, Tara, Deonna. Corey, Naima and Skyland; Great Grandchildren Cade, Johnny, Patrick, Logan, Brittney, Hailey, Aiden, Dylan, Ethan, Gavin, Nixon, and Archer. In lieu of flowers please consider a memorial donation to the South Bay Auxiliary Children's Hospital of Los Angeles. A viewing will be held on Wednesday December 26, 2012 from 3pm to 7pm, at White and Day Colonial Mortuary, 901 Torrance Blvd, Redondo Beach. The Memorial mass will be held at St. Lawrence Martyr Church, 1950 S Prospect, Redondo Beach on Thursday December 27, 2012 at 9:30am. Graveside services to follow at Green Hills Memorial Park, 27501 S Western Ave, Palos Verdes.