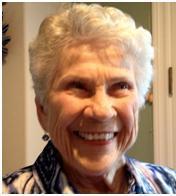 Jean T Arnold February 20, 1922 – July 10, 2013 Jean T. Arnold was born on February 20, 1922 in San Diego, California to Cecil Sterling and Hazel Baskerville Travis. She had one sister, Virginia Winegardner (Robert). On January 15, 1945, she married Grayson Bert Arnold and they had two daughters, Terri L. Arnold and Leslie Arnold-Rautman (Steve). She was blessed with four grandchildren: Jessica Arnold, and Travis (Katie), Brennan, and Lindsay Rautman. Born and raised in Southern California, Jean moved to Houston, Texas in 1973 and later to Conroe, Texas with Grayson, who preceded her in death. They resided in Texas for 30 years. Refusing to become a "golf widow, Jean took up golf and soon began out-driving most of the male golfers. She also became an avid bridge player. In January 2002, Jean returned to Southern California, moving to the South Bay with Terri and Jessica. Jean will be remembered for her sharp wit, keen sense of humor, helping those in need and for always telling it like it is. She will be tremendously missed by those who knew her best. Services will be private. Memorial donations may be made in Jean's name to Torrance Memorial Hospice, Attention Amanda Goodrich at 3330 Lomita Boulevard, Torrance, California 90505, (310) 784-3751.