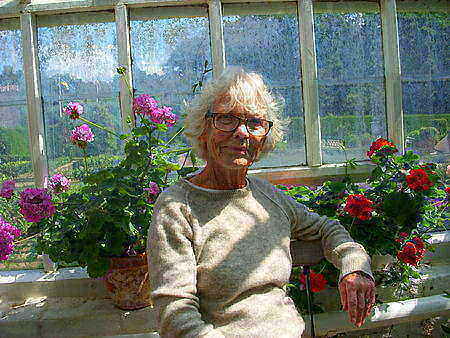 Jean Louise Winter was born March 13, 1926. She died June 29, 2012, at her home surrounded by her family, after losing a valiant battle with Ocular Melanoma. Jean was born in Streator, Illinois to Edna and Fred Ryan and grew up there with her sister Betty and her twin sister Joan. She attended the University of Illinois, joined Alpha Omicron Pi sorority, met her future husband, William Winter, and graduated with a BA in Journalism in 1948. She then worked in Chicago for one year at an advertising agency. On September 1, 1949, she and Bill were married, moved to Oak Park, Illinois, purchased a home, and started a family—Jenifer, Julie and Linda. The Winters then moved to Hermosa Beach, California, to be near Jean's twin sister, Joan, in September 1954, when Bill started his engineering career with Hughes Aircraft Company. After living there for six months, they purchased their home in Redondo Beach, where they welcomed Jill, Joy, and Joe. With all six children in school, Jean took a job at Curt Wagners gift store in the Hollywood Riviera Village, Redondo Beach. Many friends and customers recall her talent for merchandizing. Bill and Jean were founding members of King Harbor Yacht Club and enjoyed racing their Lido-14 sailboat together. Jean became very active in "First Mates," and was chosen Skipper and "Woman of the Year" for all of her volunteer work. Jean was also active in her church, St. Lawrence in Redondo Beach. She loved playing tennis and bridge, hiking, and gardening with the local garden club. She was a volunteer for the South Bay Auxiliary of the Children's Hospital. She also loved to travel—Iran, China, Japan, Europe, Scandinavia, Costa Rica, and Tahiti, among other destinations. When she wasn't traveling, Jean loved to entertain in her charming home and was a gracious and talented hostess for her many friends and family. Jean was predeceased by her daughter Linda (February 28, 1977) and her husband Bill (April 28, 1987). She is survived by her children: Jenifer Briggs, Torrance, CA; Julie Winter, Carthage, MO; Jill Banman (Ed), Santa Paula, CA; Joy Hedges (Kerry), Cisco, TX; and William J. Winter (Jody), Santa Fe, TX; her grandchildren: Karl Banman, Maria Barrell, Chandler Briggs, Megan Briggs, Ryan Winter, Christina Banman, Andrea Winter, William J. Winter, Jr., Alexandra Winter, Joshua Winter, Christian Winter, Luke Winter; her great-grandchildren Avery and Huxley Barrell; and also her two sisters Betty Coe, Streater, Illinois; and Joan Wickham, Rolling Hills, CA. Jean will be remembered as a loving wife, devoted mother, grandmother, aunt, great-grandmother and a wonderful friend and neighbor to all who knew her. Donations in Jean's memory may be made to the South Bay Auxiliary of the Children's Hospital.